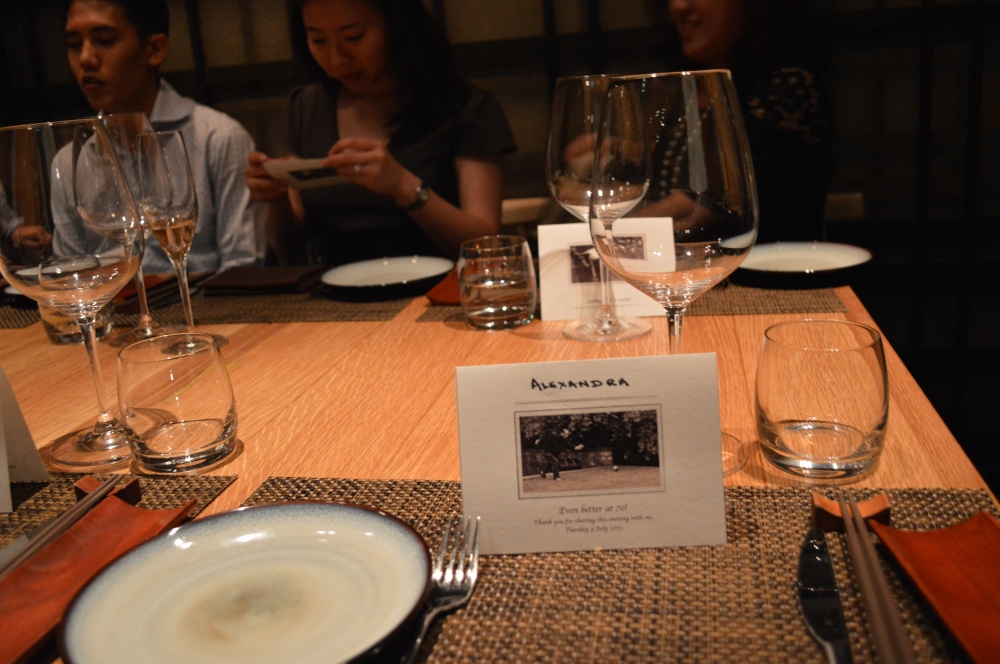 That’s the thing about personalised invitation cards. The epitome of real effort. My grandfather is still cool enough to do this sort of thing, even if, you know, he doesn’t quite know the name of the young woman beside me. Or such an example is common enough. You can’t expect the elderly to be superhuman too. Oh, but I do love him so. Charming and comely old man. Singapore’s No. 1 bowler back in the day, and with such a flying passion!

Anyways, no, this isn’t a Heston Blumenthal clone, or any cuisine of the sort. Japanese-inspired steakhouse right here. 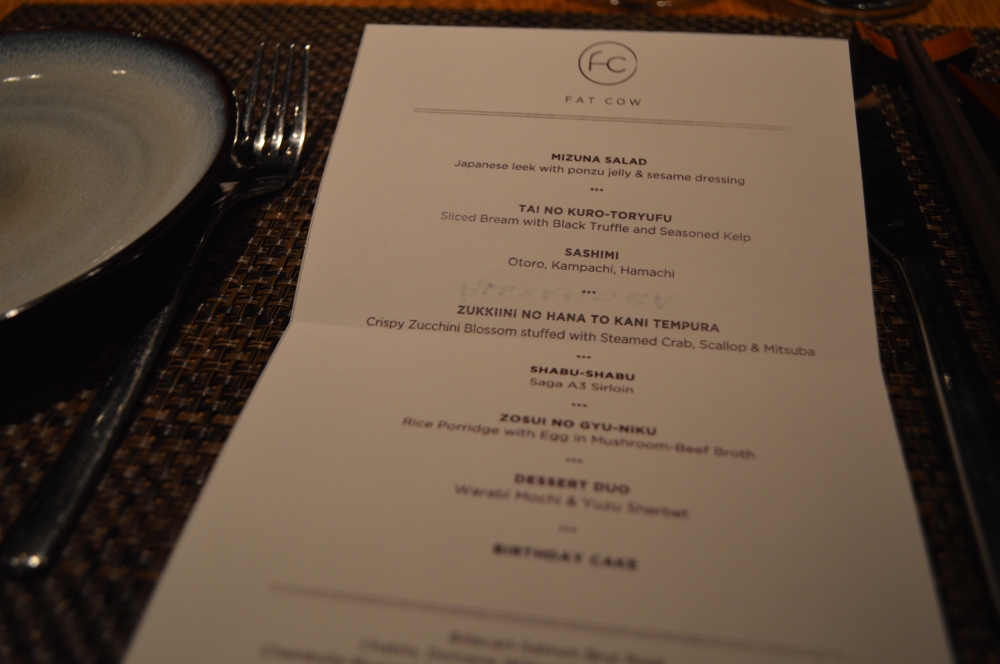 That salad was a crisp concoction made by the Tangy Japanese Gods.

I was pretty scared to touch the carpaccio, which looked about 0.001mm thin and as delicate as my dad’s hairline. But I did anyway. It was still frightening on the tongue, as it close to evaporated once it hit the buds. Moist, a little bland, but the truffle made it boom with musk and sophistication. 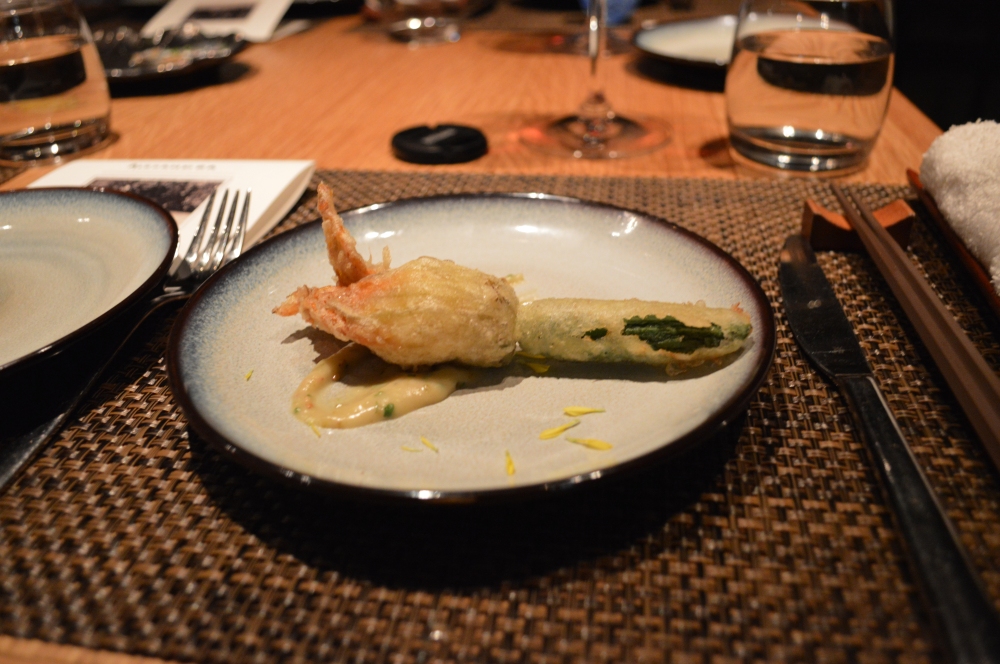 The fried zucchini flower was a light break during the rage of courses that night. The batter was airy but separated a little too easily from the flower, and its thickness merged with the flower made it seem almost incongruous. But a joy all the same.

It’s easy to talk about meat, but the steamboat here was magical. Each chopstick slip of the red, raw stuff was a ticket to the most tender slivers of melt-on-your-tongue premium beef. Boiled in a soup which starts off tasteless but ends off sweet, reduced and wondrous. I can almost feel the bubbles tickling my throat. Dip it in the pastel orange-clad shabu shabu sauce, maybe a little more in the soup, add a hint of rice and off you go and enter another mental state altogether.

Porridge. I saw it on the menu and passed it as some filler idea. But then again, if it’s on this menu, it’s got to good, right?

Right. And I was.  No really I swear. It’s the best savoury porridge you will try in your lifetime. There’s writing your will and then there’s coming here to have just one bowl of this. As they say here, it truly is shiok. Nourishing, warm, glutinous. The consistency of a wilted lemon curd, with soft, popping granules throughout, and healthy dollops of tender mushroom, shallots, garlic and chives. I need to stop here because my mouth is watering. Also, because I’m rather angry at myself for having the smallest stomach in the world, so by this time during the meal I could finish a paltry fraction of that small bowl. 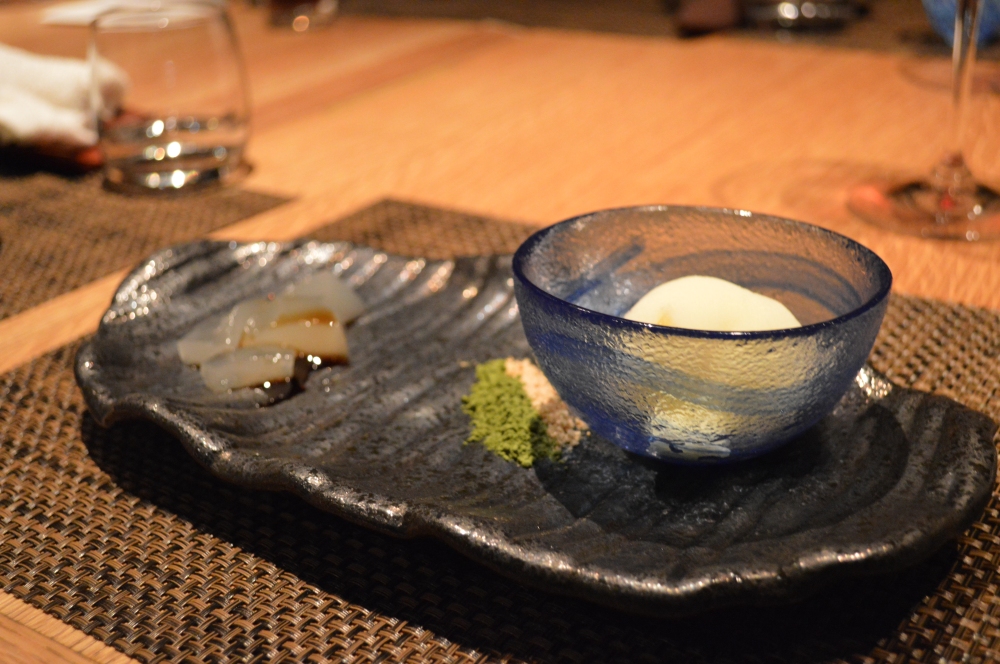 I don’t like mochi on its own, but the little translucent cuboids here were paired with a sticky, gooey gula melaka to reinforce its glutinous texture. The matcha and peanut dippings helped a fair bit, too. My favourite was that yuzu, which reminded me of white angels for some reason. I receive strange and non-sequitur connections whenever I’m faced with beautiful or delicious plates of food.

One thought on “Fat Cow”