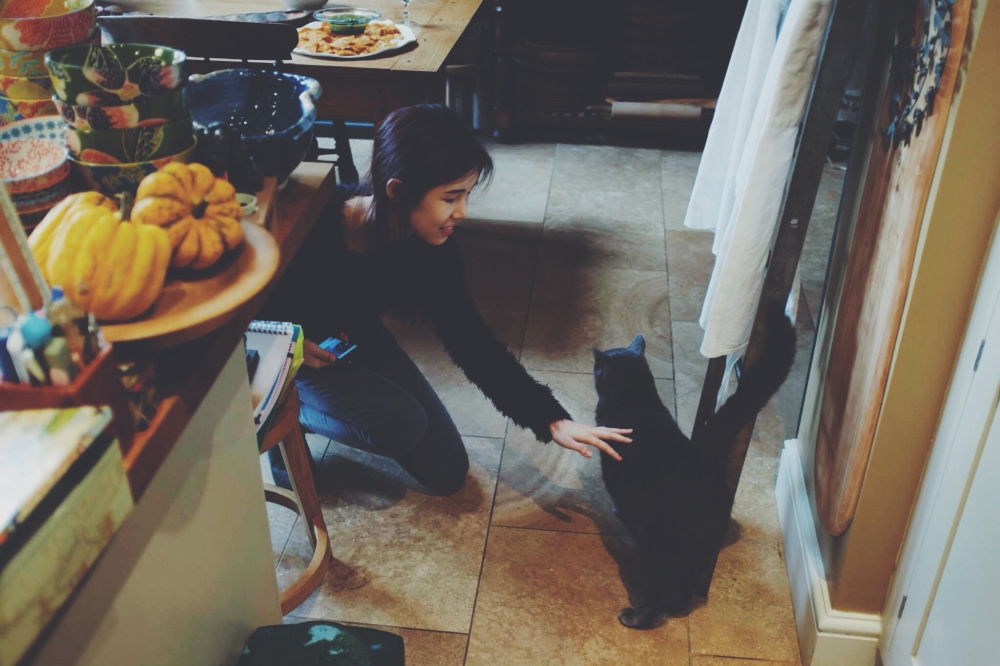 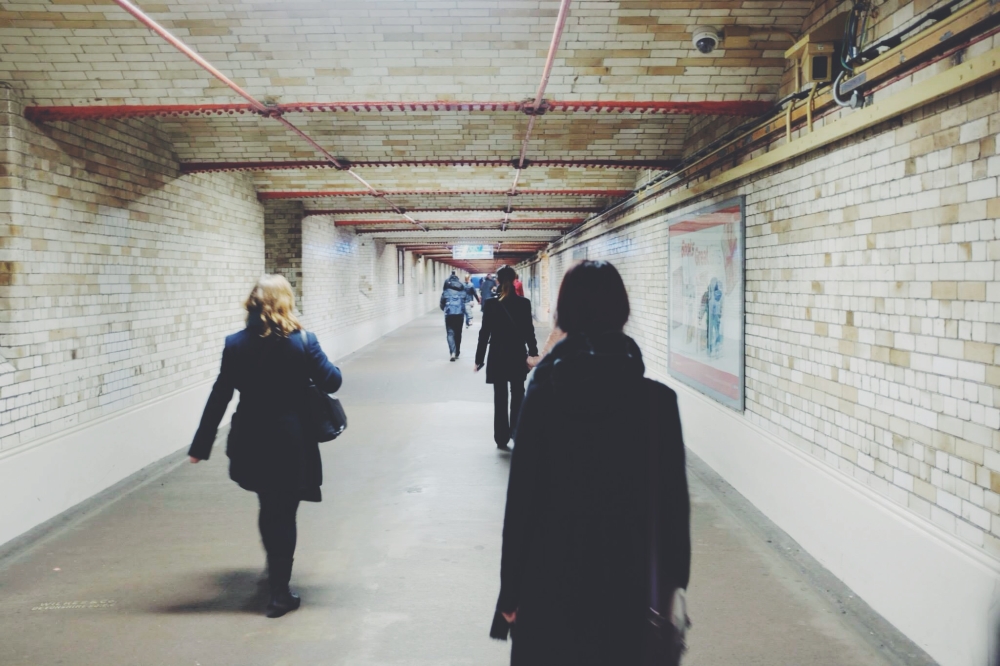 I wrote up this blog post a serious while ago. So what happened? I could say something silly like ‘life’ and ‘work’, but really it just didn’t feel too right to talk about certain things so special and close to my heart, immediately after having experienced them. I’m talking about London. To say it was upsetting to come back after being there for just a week would be a tad bit of an understatement. I only lived there for a couple of years when I was little, but ever since then we’ve (the family) found ourselves going back again and again, our home away from home. And so I mourned a little, moped a little, a slug bobbing on the waves of sadness.

But I do miss blogging regularly, and one of my New Year’s resolutions is to start doing so again. 2014 was basically a big bad ball of craziness (IB, anyone?). University applications, last minute decisions, the waiting game, trepidation. Baking adventures, some of which were great but others, not too much. Books, family, friends. I was going to write up a recipe on chocolate banana cinnamon rolls, something I made for a close friend (Hi Ruru!) during her party, which was right after graduation. Wow, that does feel like a long time ago. But I think I’ll save that for another long and detailed post. Right now, on the 1st of January, I just feel like being all shloppy. Cue the reminiscing mode.

The highlight of London, apart from the food and meeting my close friends, was meeting someone I have never had the opportunity to meet in real life before. Ever. If you don’t know her, you’re missing out. Emily Tapp, this one’s for you! 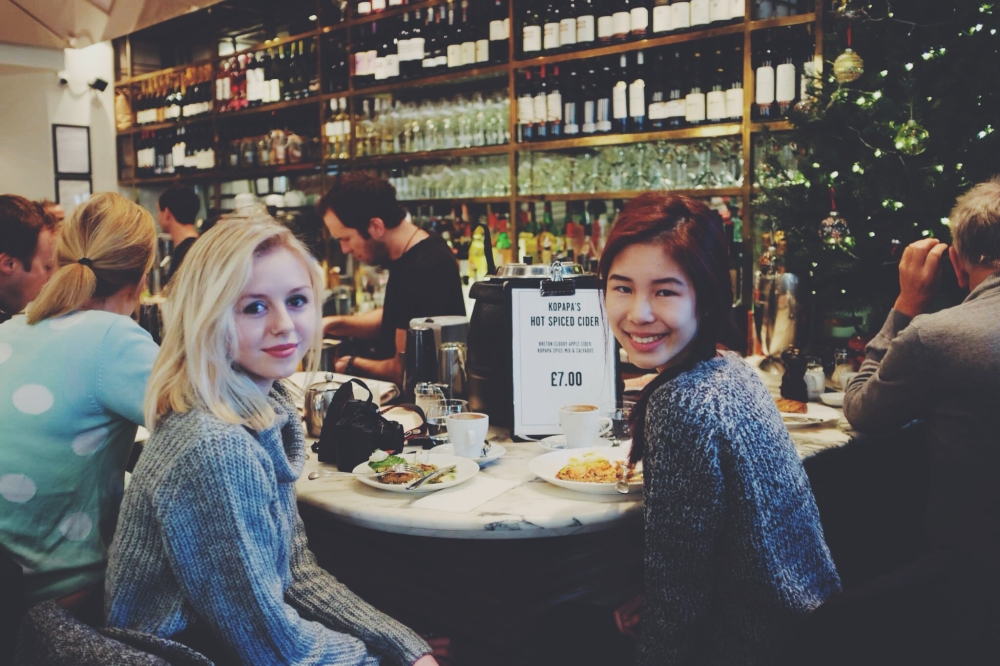 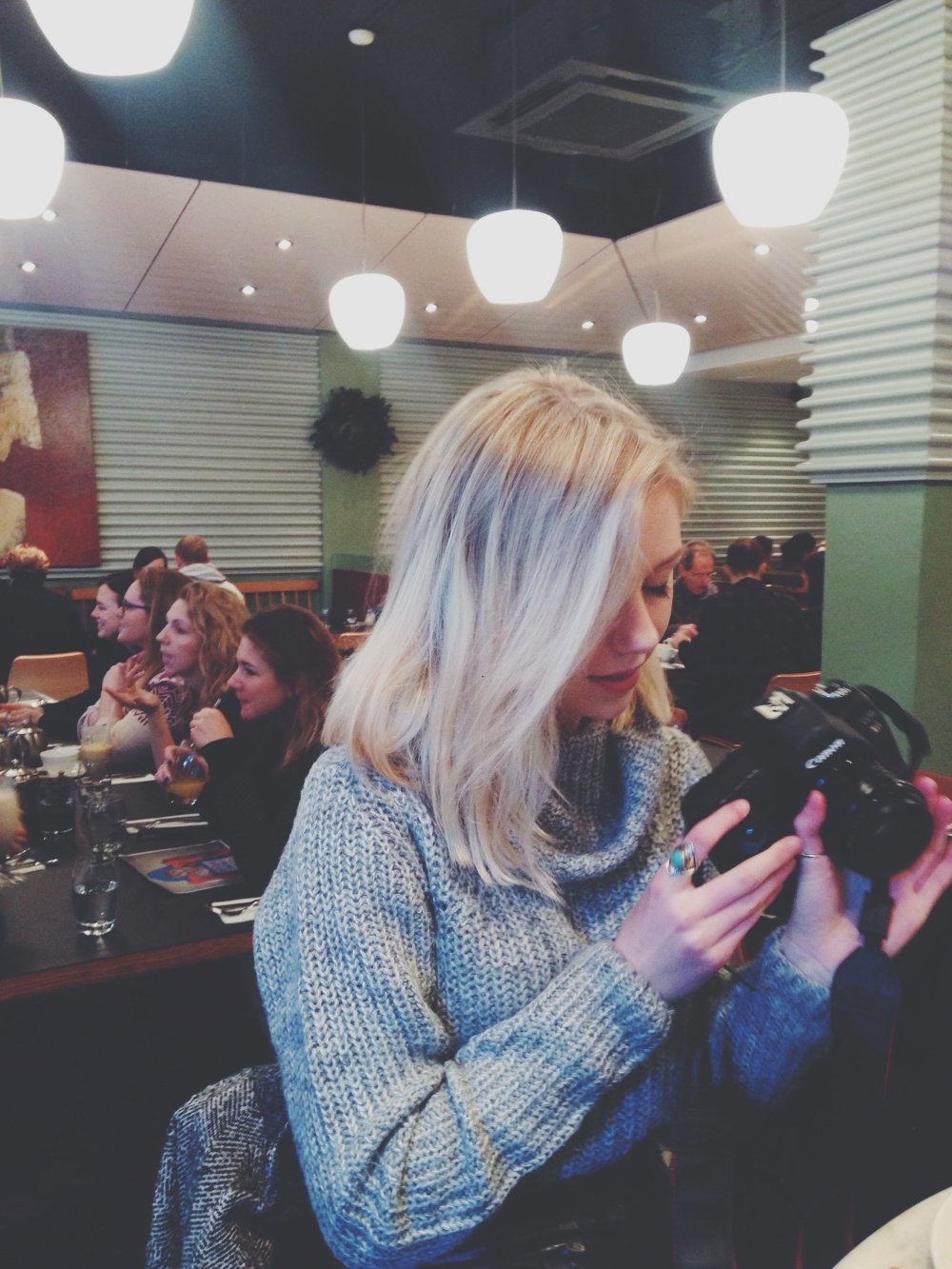 I know I know, I look like a pig’s bum next to her. I do love how we’re both wearing grey sweaters, though. Em is the girl I’ve been writing to for over a year now, which is just crazy to think about. A gorgeous one, don’t you think? Not to mention her drool-worthy blog cortadochronicles, which is full of the most outstanding vegan recipes. Her photography is sublime. It all started after Christmas of 2013, when she commented on my handwriting. All of a sudden, I was thrust into one of the most priceless relationships. Despite some air mail mishaps (I’m actually laughing now), we pushed through and continued to send letter after letter. I doted on each one. We always meant to see each other in real life, but to be honest, a little part of me was afraid that this would never really happen, like wishing for a vintage Mercedes on Christmas. It could happen, it just might, but what are the chances?

But it happened, and I still can’t believe it did. I remember stumbling into Kopapa, the brunch place we agreed to meet at, late that morning. Gosh, I remember every single detail it’s scary. Would she think me weird? People always think I speak a little weirdly, with the mixed wishy washy accent. Also, my hair felt incredibly dry. My left eye was swollen, and I was fiddling with it the whole time. Ooh, don’t get me started on my reptile skin. It’s like it thrives on humidity, so much so that it’s still dry here in Singapore. Did I look human? I wasn’t there long before she came, all perfectly primped and blonde and smiling. An angel with sparkling eyes. It was so weird; all the worries I was preoccupied with 10 seconds ago just vanished. Who was I kidding– why was I even scared? She wasn’t (and isn’t) a stranger to me. She’s Emily, the girl I’ve been writing to for the longest time. It’s like I’ve seen her before, anyway. I’ve always had a picture of her in my head when I write, and it was surprising to see it come to life, but the long and short of it is that all those letters which connected us, two girls thousands of miles apart, made me feel comfortable. At home. Happy. It wasn’t in the least bit weird. Getting lost in conversation over poached eggs (she had avocado toast which looked ridiculous) and flat whites was really the best thing ever. We wandered around Covent Gardens, then took the Tube to Borough Market where we drooled over everything and made quite a few stunning purchases. Thanks to Miss Em, I convinced myself to buy the most gorgeous honey drizzle and a wooden plating board from Borough Kitchen (see below). Before I had to leave, we hugged three times. It definitely wasn’t enough. We did so much in one day, and I had so much fun. I can’t wait to eat and shop together again some time in the future! Ah, the future. Em and I have an art cafe planned. I can see it all already, and I’m starry-eyed.

In my second or third letter to Emily, I told her that one of my favourite foods ever is French toast. A few days ago, I made it out of habit. Before I dished out the goods on a plate, I decided to change it up a little and put it into a bowl, all dressed with a myriad of toppings, drowned in syrup and milk. It was a pretty revelation. I call it the French Toast Bowl. But be warned. Those averse to sogginess should skip this recipe! I’m the sort who fawns over soggy cereal, so…

Make your french toast as how you would usually do. Use fresh or day-old bread (I used a soft walnut raisin loaf here). So go ahead! Cut the bread thick enough so that the inside is still a little gooey after cooking. That’s my favourite bit, really. Whisk together one egg, a splash of almond milk, vanilla extract in a shallow dish. Take two slices of the bread and dunk into the mixture for a good few seconds on each side. I have a good recipe for vegan french toast, which you can find here. Fry with a good pat of butter on a pan preheated on medium-high heat. The sides take 2 minutes and a minute respectively. The slices should turn golden and tender, and the middle soft to the touch. Once done, cut into pieces, as large or small as you like.

Dish out your french toast into a bowl. Top with whatever you want– I used maple syrup, banana coins, sea salt caramel and homemade maple peanut butter. I think nut butter is a must. Then comes the best bit– the milk! Take that carton and do the Splash. Drench your little french toast cubes in cold milk. After a while, the pieces will go all soggy and delicious. Mixed with the syrup/honey and nut butter, it makes for a wonderfully sweet and satisfying breakfast. It’s like oatmeal, except you actually get to chew the stuff this time.