Nothing like sitting down in a cosy café to write up another yummy recipe. Just had a double salad full of gorgeous greens and beans, the sort of thing which this recipe perfectly complements. Going through recent journal entries always bring forth the necessity of consistency, self-belief, self-growth, and routine, but they also revealed how easy it is for me to get lost in a tangle of unhealthy mentality and unnecessary indecision. I guess it’s okay to excuse oneself for wondering which food photography backdrop to get next and whether the bananas I just caramelised with vegan butter and a lush deep muscovado sugar would pair better with melting dark chocolate or a simple cinnamon and coconut nectar drizzle (the former was quite the mouth show, and I need to do that more often. It’s basically a wholesome sundae for breakfast). The peril of freedom of choice! How superficial it seems, and yet, what changes they bring– to my entire outlook on life, on the way I behave. Just like how I had mushrooms on toast for brunch last Saturday and I could actually feel my heart leap with joy upon seeing perfectly caramelised onions, browned and gooey, stuffed between morsels of juicy oyster and morel mushrooms heaped on a bordering-carcinogenic piece of toast lovingly slathered with homemade hummus. Sweet moments make themselves known. Because they do make life that much sweeter.

Yesterday I ate a delicious carrot cake chockfull of walnuts. Not the most salubrious thing to have at 2pm, but it did hit the spot like nothing else. Typically a big green apple does it, but yesterday, that fine Tuesday, the cake was a brio in my mouth. If you’ve been following me for a while, you’d know just how much I resonate with the idea of moderation, so necessary in this age of health and nutrition information advertised to propagandic effect. Cake and coffee by myself, mindful and beautiful. Life is about health, and also about letting go. A pure, one-dimensional sweet this cake was, but what was missing was the hint of tart from the cream cheese component (if only vegan cream cheese wasn’t so pricey, right?) in the icing. Tart, the cousin of sweet, is sometimes necessary to balance whatever saccharine loveliness a baked good or breakfast item has to offer.

Tart, this pinch of sour, to round off the sweet. Tart, like this rhubarb phyllo galette. Thank you Aldi for 50p on-sale fresh, seasonal rhubarb! This is a twist on a recipe recently written up by Linda Lomelino, one of my favourite baking and dessert bloggers. With plenty of phyllo pastry left over in my freezer, I thought it would be interesting to see what would become of it. Phyllo pastry may be delicate, but it’s also incredibly versatile, and should not be reserved just for baklava and other Middle Eastern desserts. Here is what happens: You layer half-sheets of phyllo pastry on top of each other, each layer brushed with a delicate layer of olive oil to help them stick together, whilst allowing the galette edges crisp up nicely in the oven (without burning). Broken pastry? No big deal. A galette is meant to be rustic, and tears and breaks here and there will only enhance, not detract, from this. 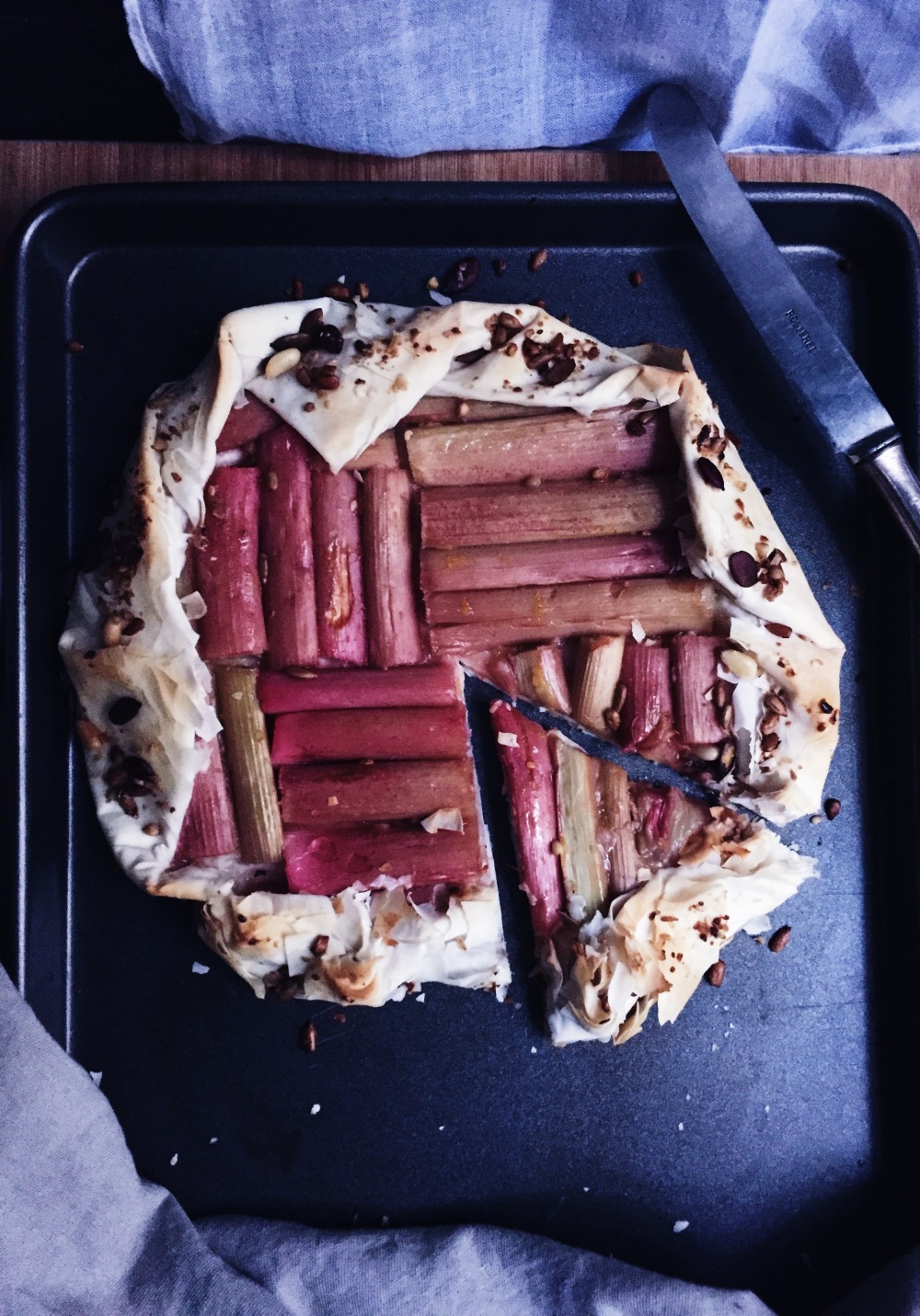 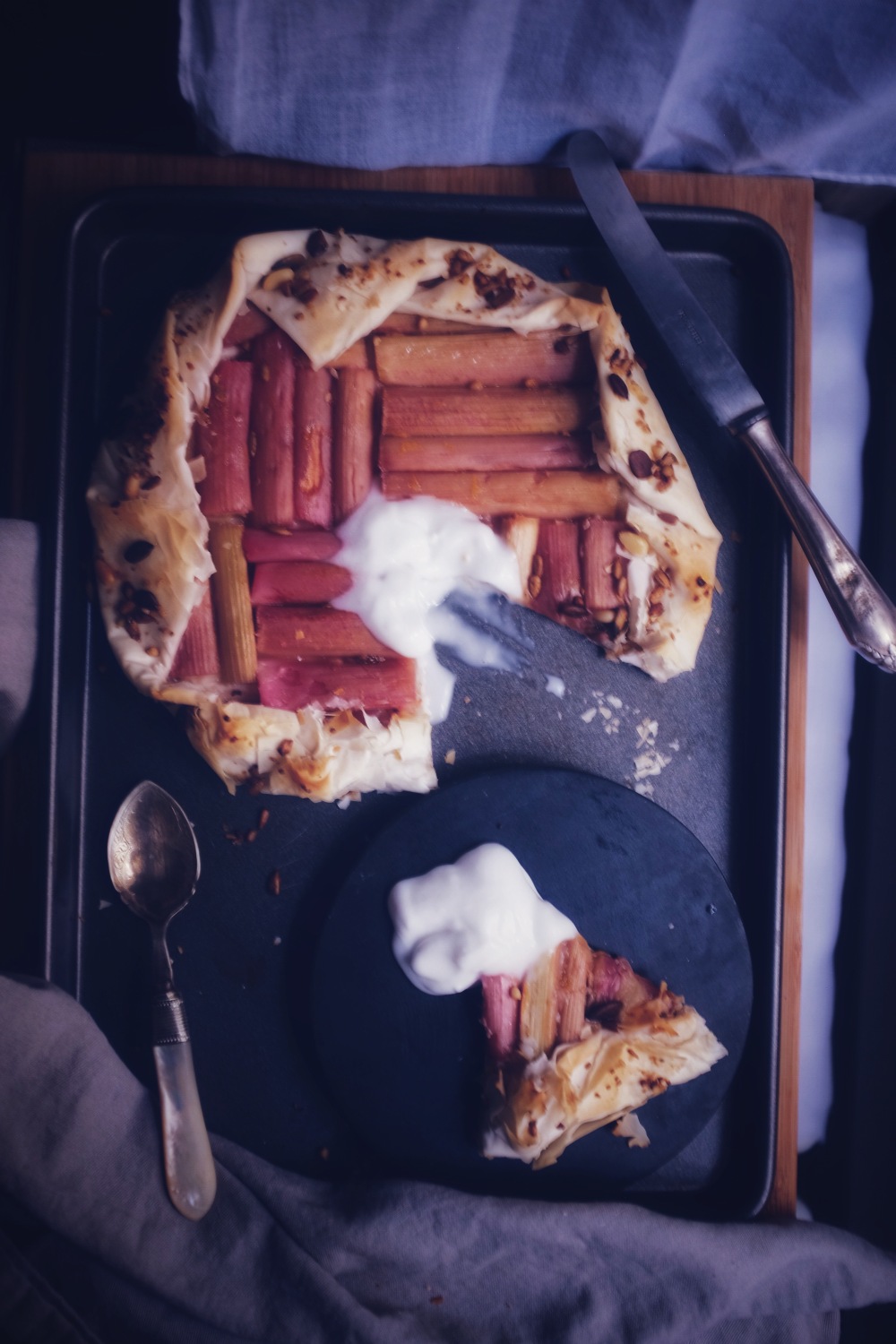 200g rhubarb (about 4 large stalks), washed and leaves/ other possible dirty bits and bobs cut off

juice and zest of half a lemon

9 half-sheets of phyllo pastry, thawed (from frozen) in the fridge overnight

*optional: sprinkle of mixed seeds (I used a very random mix of sunflower and pumpkin seeds, and some homemade buckwheat granola)

Preheat your oven to 180C (350F). After weighing out the rhubarb, cut each stalk in half lengthways, then cut into batons, each 4cm in length. Put the rhubarb batons in a bowl, add the lemon juice and zest, cornstarch and sugar, and mix well with a spoon, until the batons are all coated in the lemony-sugar mix.

On your work surface, place one half-sheet of phyllo pastry down. Brush this with a thin layer of oil or melted vegan butter, then place a second layer on top. Repeat, until you have three layers on top. Rotate this thin stack 90 degrees, then do the same with the next three half-sheets, not forgetting to brush each layer with  oil each time. Rotate 90 degrees again until you are at the same orientation as you were in the beginning with the first three sheets, and then layer on the last three half-sheets so that all 9 half-sheets are used up at this point. You should get what looks like a thick cross shape, with 8 corners

Fold each of the 8 corners down, so that you have an octagon shape. Take your rhubarb batons and place them in whatever pretty pattern you wish, in the centre of the octagon. I did a series of horizontal and vertical batons, but you could also just heap the stuff in the middle. Then fold over, somewhat in a rough and random manner, the perimeter of phyllo pastry, over the border of rhubarb to get the shape of a galette. Brush the pastry with more butter/olive oil, sprinkle on the 2 tablespoons of sugar, and the optional sprinkle of mixed seeds. Bake in the preheated oven for 13 minutes. Watch the galette carefully– it’s done once the pastry is a pale brown.

Leave the galette to cool a while on the counter, before slicing and serving with coconut yoghurt or a refreshing scoop of vanilla bean ice cream.