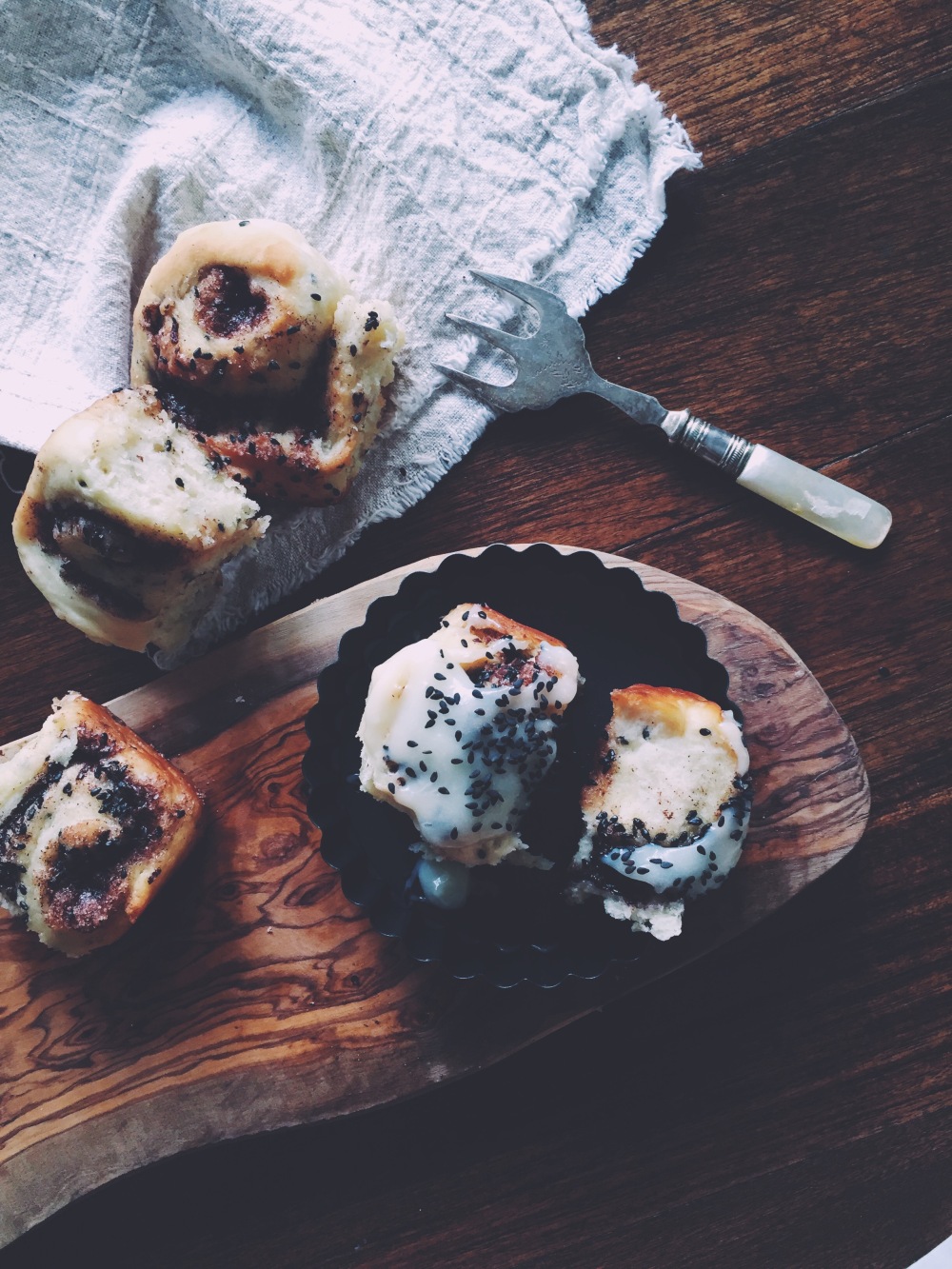 I never expected a single public holiday to represent such freedom. Quite loving this mind shift, this change of tide, in the sense that I now savour small things like this. Like a short breather in between a long-range marathon. After all this time, I still get excited about writing blog posts for you guys, and creating different, easy-to-make (usually) recipes on all things breakfast and sweets. So it feels good to finally getting round to blabbering a little bit more in the morning. Indeed, I wouldn’t mind some pipette work in the lab, mind to matter, but days away from its calming sterility call for things I love most– drawn-out bouts of journalling, reading, watching, feeling, thinking, loving. With lots of coffee and tea, of course. 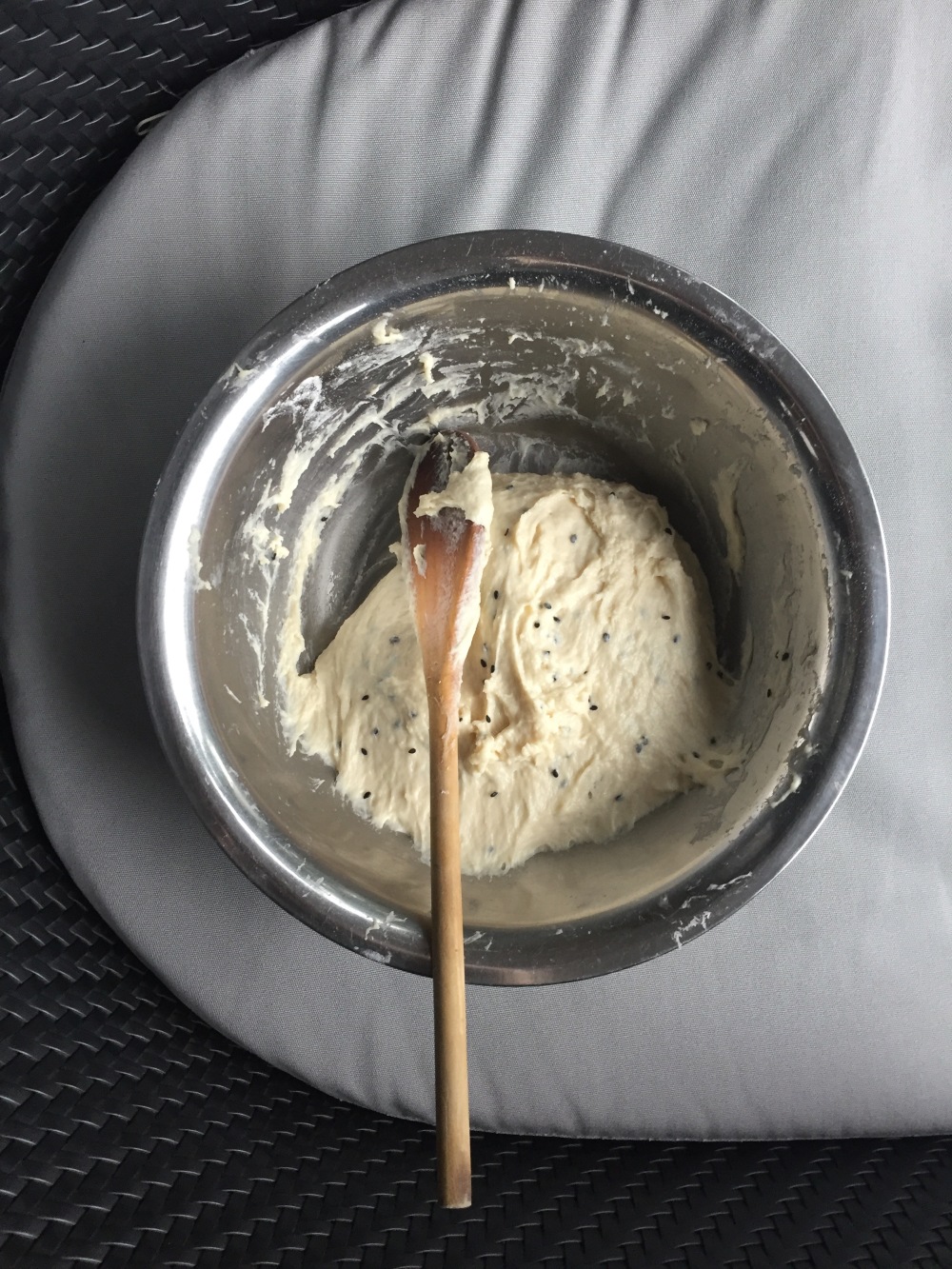 Back in my first term at college, I modified a recipe for eggless cinnamon rolls out of pure circumstance. I didn’t wish to make them specifically for a vegan friend, though these turn out to be quite the treat if you do wish to make it vegan (simply change the milk and butter you use), and one wouldn’t be able to tell the difference anyway. The crunch of the black sesame pressed into a cinnamon-sugary-sweet filling is heaven in this one. The dough itself is satin and fluff, easy to tear and almost melt-in-your-mouth. 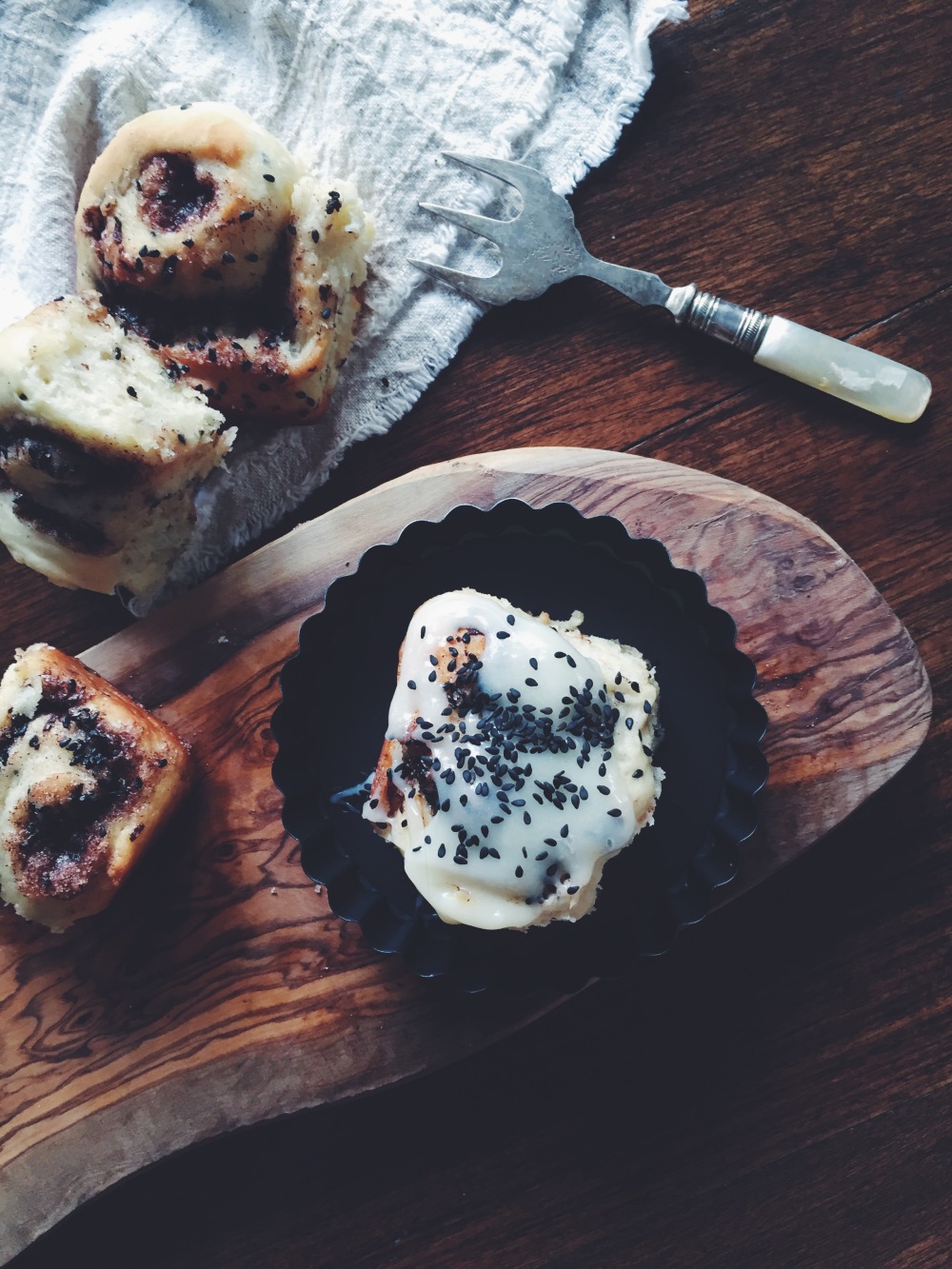 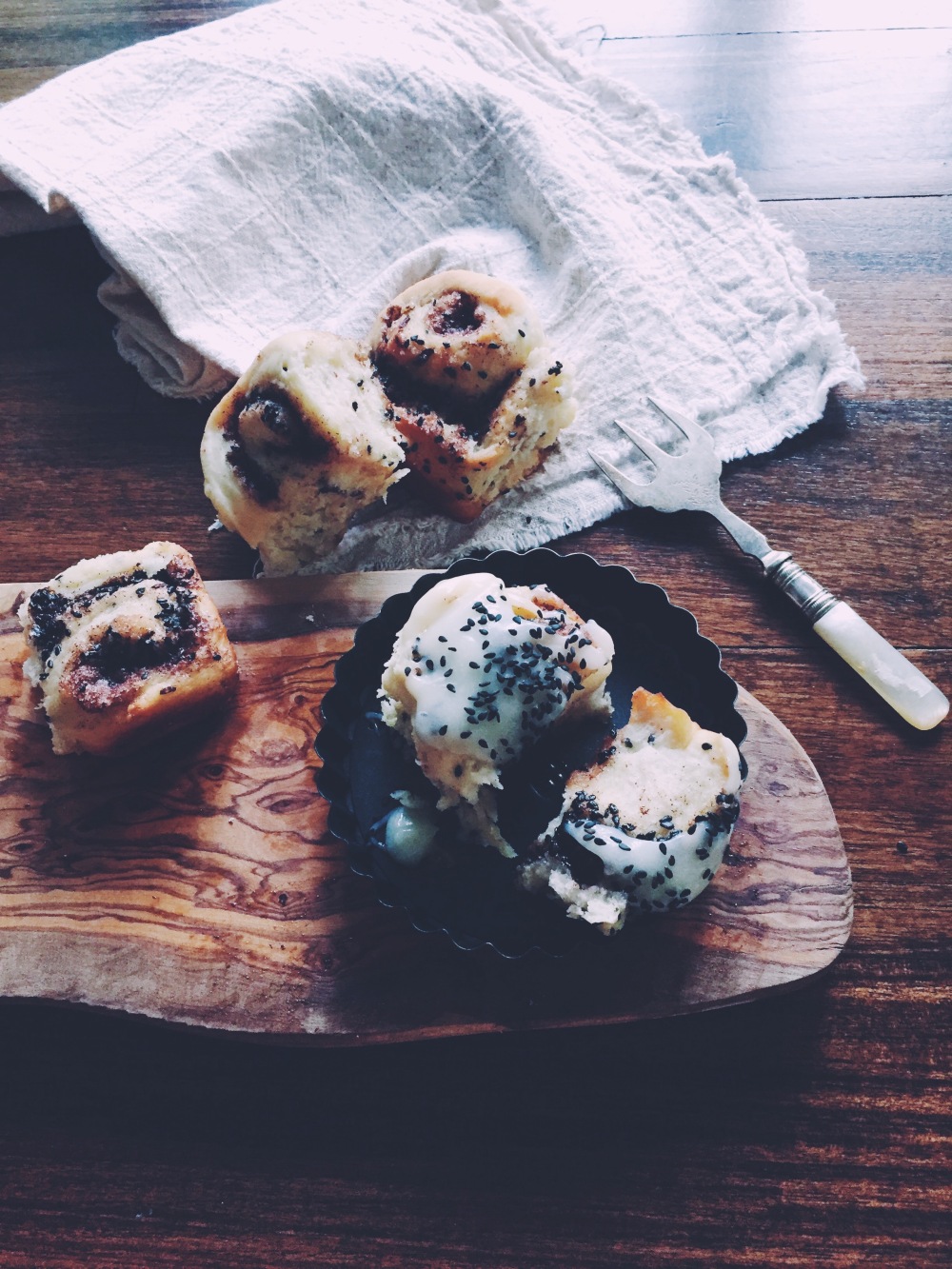 I’ve talked about these already in my first post on the recipe, so do go check it out, especially for some side profile sass and another cute flavour approach. The black sesame in this one elevates the humble bun’s sophistication, and adds several health benefits to something that’s not exactly the most healthful breakfast (ha). Rich in iron, calcium, zinc and B vitamins, just a sprinkling of the seeds lends quite a boost to your day’s nutritional profile. I’m not trying to deceive myself or any of you into thinking these are actually good for you, but hey, the sprinkle is still something, and it’s intriguing and fun to think about, at least to me.

250g (around 1 3/4 cups) plain flour, plus more for sprinkling on counter before kneading

3 tbsp black sesame powder, which you can usually buy from your local oriental store

Dough: In a microwave-safe bowl or in a saucepan over low heat, heat together the milk and butter until the butter has melted and the mix is warm (not scalding) to touch. Pour the mix into a larger bowl, then sprinkle on the yeast on one side of the bowl, and the salt and sugar on the opposite side. Wait 5 minutes, then add a half cup of flour at a time, stirring with a wooden spoon between each addition, followed by the black sesame powder. Once the dough is too thick to stir, transfer to a lightly floured counter and knead for 2 minutes. The final result should be a smooth, rather taut ball of dough, so you may need slightly more or less than the aforementioned quantity of flour. Briefly grease the same bowl, pop the ball of dough in and let it rise until it doubles in size–around an hour. At this point, preheat your oven to 176C (350F) and liberally grease an 8×8-inch pan.

After the dough has risen, lightly flour your counter again and turn the dough out onto the counter. Roll it out into a half-inch thick rectangle. Brush on (I just used my hands here) the butter that’s softened to room temperature, then sprinkle on the cinnamon-sugar mix, black sesame powder and black sesame seeds. Tightly roll the dough from the long end, so you end up with a long, pale tube of dough. Place the roll seam side down, and using a serrated knife, cut your tube into 8-9 rolls, each around 1.5 inches thick. Place them into the greased square pan. Cover the pan with foil to avoid over-browning and place inside your preheated oven. Bake the rolls for 20-25 minutes.

While they’re baking, mix together the ingredients for the glaze in a small bowl. Once the rolls have finished baking, leave to cool for 10 minutes, then go ahead and glaze the heck out of them. Sprinkle on some black sesame seeds to top. These rolls are best eaten immediately or at least the day they’re made, however you can keep them for the next day and microwave them to revive a bit of tenderness. 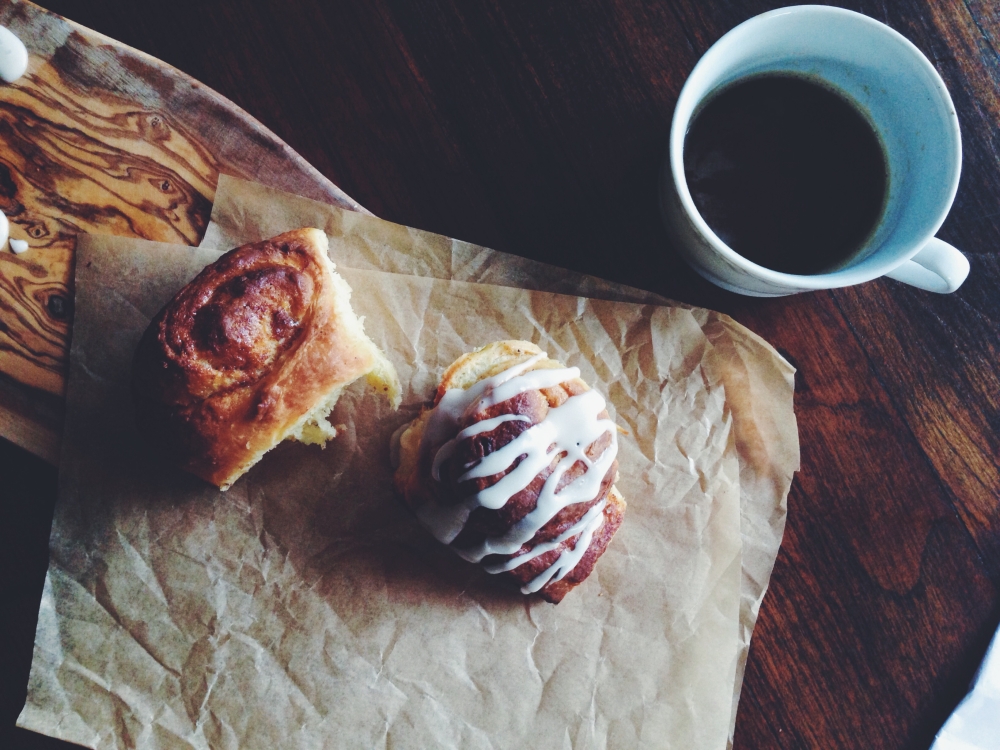 I almost detonated when I saw the news headlines 2 days ago concerning the murder of freelance journalist Kenji Goto.

So many grotesque or inhumane things occur nowadays that most of us have been rendered practically immune to their effects. This murder in particular, despite its obvious malice, was probably expected. Abe went from stoic to emotional in no time, but the inevitable couldn’t be prevented. Beheadings and carnal torture methods are still being used around the globe. Violence is fought by violence, two fires igniting and ultimately, doing nothing. One side may be susceptible, perhaps a little forgiving, but sometimes that only stirs the impatience of the other party. There is no win-win situation, is there? Such malice is beyond comprehension. ISIS, in contrast to the USA’s initial certainty of its containment, is still evolving, affecting, blighting freedom of speech. Killing. Us humans, ultimately, have regressed. It’s back to the French Revolution again. Where are the guilliotines on the streets? If we aren’t the bad guys, we’re the onlookers who can’t do anything but sit back and squirm. I wonder when a balance will prevail.

Alright now. I made banana chocolate cinnamon rolls two months ago using a blog link I thought I trusted. The dough itself turned out ok, however it just didn’t possess the most desirably degree of fluffiness of brioche-like tenderness of crumb. The tops were a little too hard, and a knock sounded hollow. Something had to change, right? 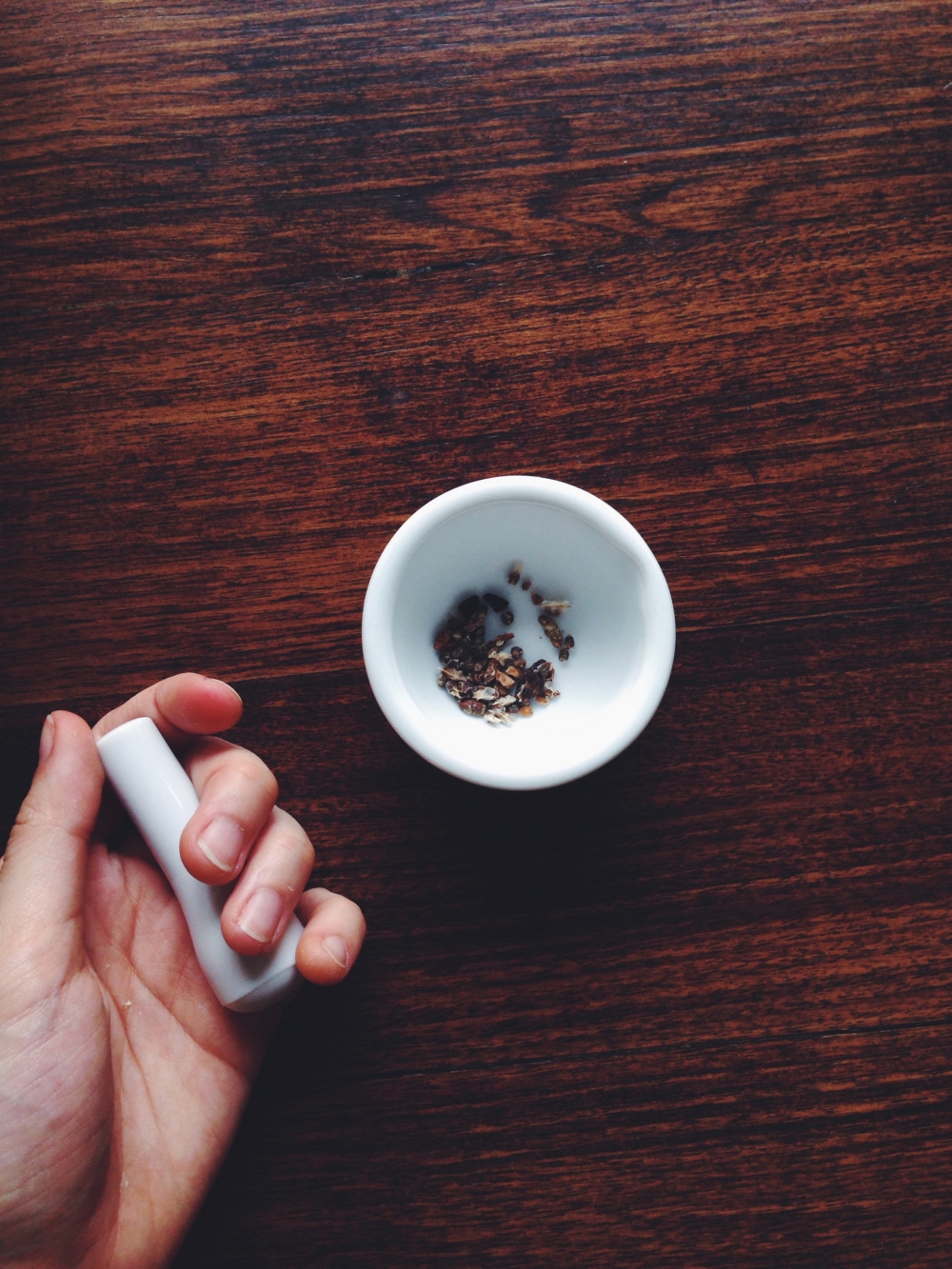 First thing’s first. This recipe involves overnight proofing, which makes it easy for you if you want to chuck this in the oven first thing in the morning and have something sweet and comforting for breakfast. On the weekend, probably, when you won’t feel too guilty. You whip up the dough the day before, let it proof a while, roll and fix your little buns in a nice little tray, then throw it in the fridge. All that time taken is so worth it.

I’m lucky to have a stash of spices around the house. When I saw the box of cardamom, unground, waiting, I knew I had to do something with the stuff. Anyways, I had never experimented with cardamom before. I wanted to keep the main idea of banana and cinnamon, but in order to keep the purity of flavour of cardamom in tact, I decided to forgo the chocolate. That being said, after the process of rolling and spreading the filling, please do feel free to add chocolate chips or chunks. Not a lot of cardamom is ground and used to produce a subtle yet effective aroma, so the addition of chocolate would be complementary, not distracting. 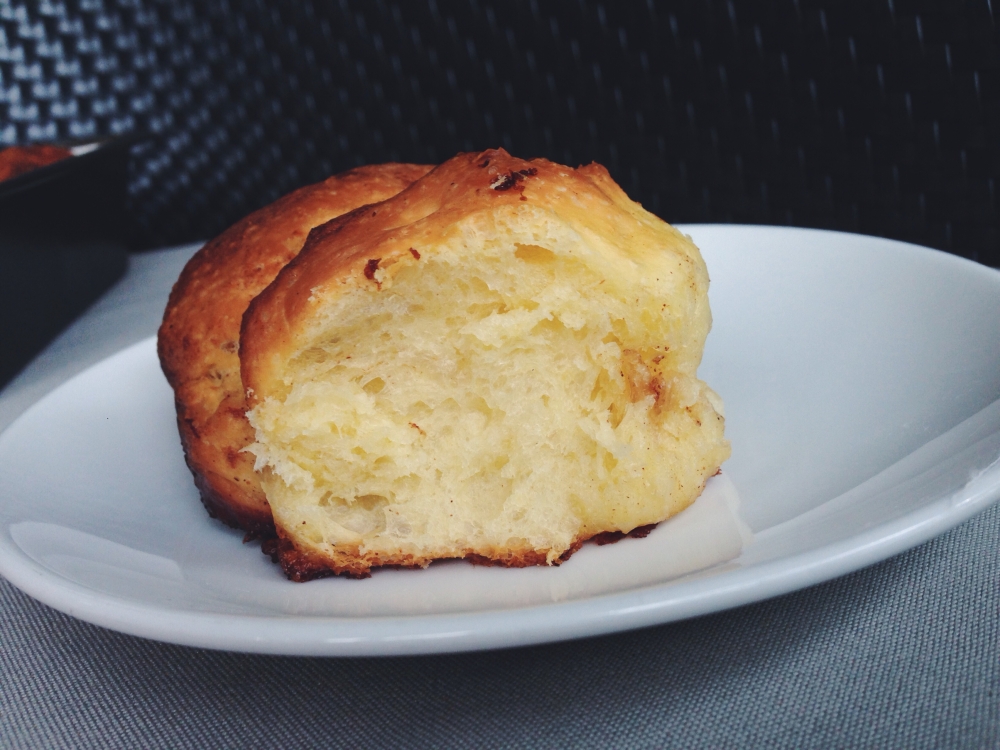 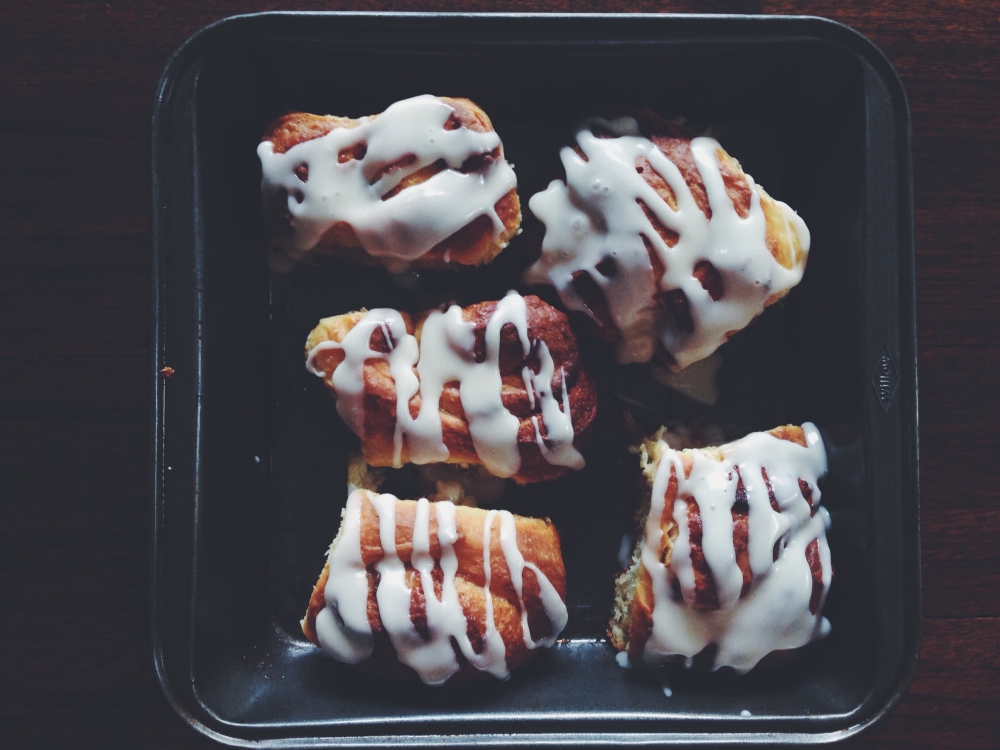 The key to the soft, tender crumb, light and springy, is in the length of time taken to both knead and proof. When I first tried making cinnamon rolls (the traditional sort choked in cream cheese icing), I couldn’t get my head around the slogging away with my poor hands at the counter, and baked them just a little too soon, when the dough wasn’t robust. Sticky, but not worked at enough. Thankfully, I know much better now. This recipe, which I adapted from the lovely Smitten Kitchen, yields rolls which are fluffy, yet have sufficient body and weight to grant themselves the proper title of ‘roll’. For what is a roll without the keen addition of air (and a ton of butter)? In her original dough recipe, she first stirs the batter in a bowl, before turning it out to properly knead by hand (or you can use a kneading machine). Here, I decided to do it all in the bowl, to prevent precious batter getting stuck between my fingers and washed away. I knew I was taking a risk to prevent an episode of sad farewell, but it all paid off. I used a simple vanilla icing, though these may also be made with your favourite cream cheese icing recipe. The banana, which is mashed together with butter as the base filling, addresses the cardamom amicably, not letting it overpower, providing comforting flavour and a nice gooey touch alongside the strong spice. Some of the banana will touch the bottom and melt in the heat of the oven, so bits of the bottom will get all caramelised and crackly. Isn’t that the best thing in the world? I think so.

Actually, if you like crusty tops and sides in general, then I implore you to read on. 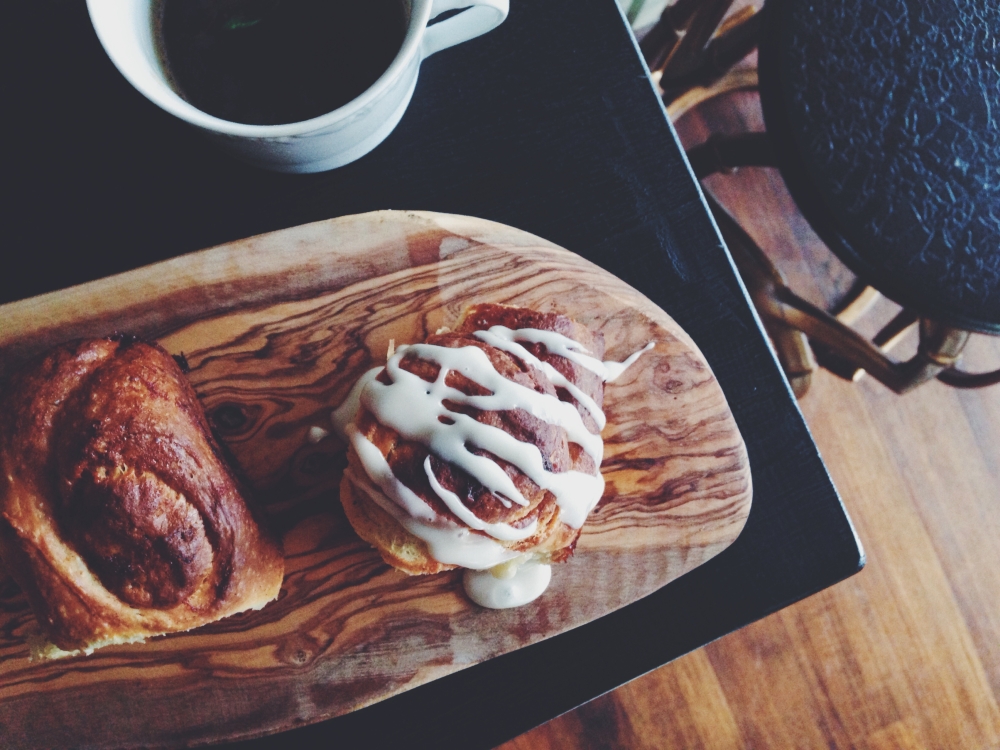 Banana cardamom rolls (makes 6-7, adapted from here. Recipe can be doubled for 12 buns)

1 small, ripe banana, or half a large one, mashed

In a large bowl, whisk the egg, egg yolk, sugar, butter and milk together. Mix the yeast, flour and salt (make sure yeast and salt are on separate sides of the bowl) in another smaller bowl.

Add the dry mix to the wet mix and stir with a wooden spoon. Stir just to combine at first, then with a little more vigour once the dough comes together. Stir and beat the mix for around 5 minutes. The dough will be extremely sticky! But do not fret. That is what you want. Take a short break here, then continue ‘kneading’ for a couple more minutes, in the bowl with your spoon. I kneaded for a total of 8 minutes, no more and no less. After kneading, the dough should be pale yellow, and very resistant to further fiddling. Stretchy, glutinous, strong, and still very sticky.

Take dough out of the bowl and put into a clean bowl, oiled or sprayed lightly with cooking spray. Cover with plastic wrap or a damp tea towel. Let this rise for 2 hours.

In the meantime, make the filling. Mix the mashed banana and butter together in a small bowl, then mix the cinnamon, ground cardamom and brown sugar in another. Butter/spray a 9×9-inch baking pan or 9-inch circular pan (for cheesecakes/normal cakes etc).

After 2 hours, take the proofed dough from the bowl and press into a 9×6-inch rectangle on a lightly flour-dusted counter. If you’re doubling the recipe, press it into an 18×12-inch rectangle. Take the mashed banana and butter mix and spread on the dough, making sure not to layer it on too thick, and leaving a centimetre untouched frame along the sides. Sprinkle on the cinnamon, brown sugar and cardamom. At the point, you may wish to add chocolate chips or chopped nuts. Gently roll the dough from the long edge to form a 9-inch cylinder. Using a serrated knife, saw the log into 1-1.5-inch sections. I managed to squeeze 7 from this batch. Put the sections into your baking pan. Cover with cling film or a towel and pop into the fridge overnight, or up to 16 hours.

20 minutes before baking the next morning, remove the pan from the fridge to let them warm up a little. Heat oven to 177C (350F), and position the middle rack. Bake the buns for 27-30 minutes. Mine took 28 minutes. Halfway into the baking time, cover the buns with a piece of aluminium foil to prevent them over-browning or burning. During this time, mix all the icing ingredients together, then go ahead and make yourself a cup of tea whilst browsing the papers. Once the buns emerge, let cool on a cooling rack. The absolute best thing about these buns is that they actually take a very short time to cool down, so you can have one straight out the oven (like me). Drizzle the icing over one to enjoy first, then drizzle the remaining icing over the other buns half an hour later, once they’re fully cool, so the icing won’t melt all over the place.