It would be very hard to condense a bunch of profound emotions and thought trails into a single blogpost, and it doesn’t exactly help that even I haven’t properly digested the fact that something I wrote has been published and is available online for the whole world to see and buy. Yeah. CRUMBS, the book I’ve spent a substantial chunk of summer intensely working on, is now available on Amazon and Barnes &Noble! This is madness. This is redunkulous. You know it’s big when I use exclamation marks in blogposts, ha.

From my heart to your heart, from my kitchen to your table, from my oven to your oven. This is madness. There are over 40 pages of recipes, with multiple variations and detailed descriptions. Most have been modified from various sources, trimmed and personalised over more than 2 years of playing around with iPhone in hand, flour on my face, hopping about like a lunatic from oven to study desk just to check to check on a loaf of banana bread. All kept me going. Putting the book together has elucidated the nurturing, enlightening nature of solo fun in the kitchen, and I give a more personal account of my intentions and motivation regarding the writing process and recipe themes in the book itself. I am so grateful; none of this could ever have happened without a few key people who pushed me to do so regardless of what I thought. No, I always said. But the will emerged on top, and Crumbs was born. Watch out for a few more posts highlighting some book features and sneak-peeks. I mean, this blog itself is already a huge sneak peek, but there are some recipes in there that have been heavily revised and boosted for the book, for all of you.

A little present today, that’s by no means in Crumbs, but one so easy it deserves a place in the archives and not hurriedly scribbled in my notebook, inevitably forgotten and totally left behind.

Vegan sweet potato doughnuts. I laugh at the thought of me a few years ago, cursing the word ‘vegan’ and anything to do with that category, always of the opinion that ‘such’ self-imposed, rigid health standards did no one good, oblivious to the ethical and moral reasons behind the movement. After watching too many a documentary and educating myself only years later, I now admire the tenacity in word-spreading and lifestyle change, not talk alone. There is indeed justified meaning behind all this buckwheat, sweet potato, corn and quinoa. Not only is all of it delicious, it’s also good for us, the planet and, heck, the future. There will always be so much controversy in this field, but that’s human nature for you, and where’s the harm in contributing that little bit for generations to come?

Alright, the condensed milk icing on top obviously isn’t vegan, though you can always leave that little bit, and mix some nut milk and icing sugar together for a similar effect. As always, super easy to put together– literally a matter of plopping wet with dry, mix mix mix, spoon into doughnut pan (something I think you all should invest in if you haven’t already, for the luxury of quick doughnuts without the guilt of pouring litres of oil into a huge vat just to fry some for a few guests, though of course that’s also perfectly acceptable and I should indeed get round to listening to my own advice once in a while.) 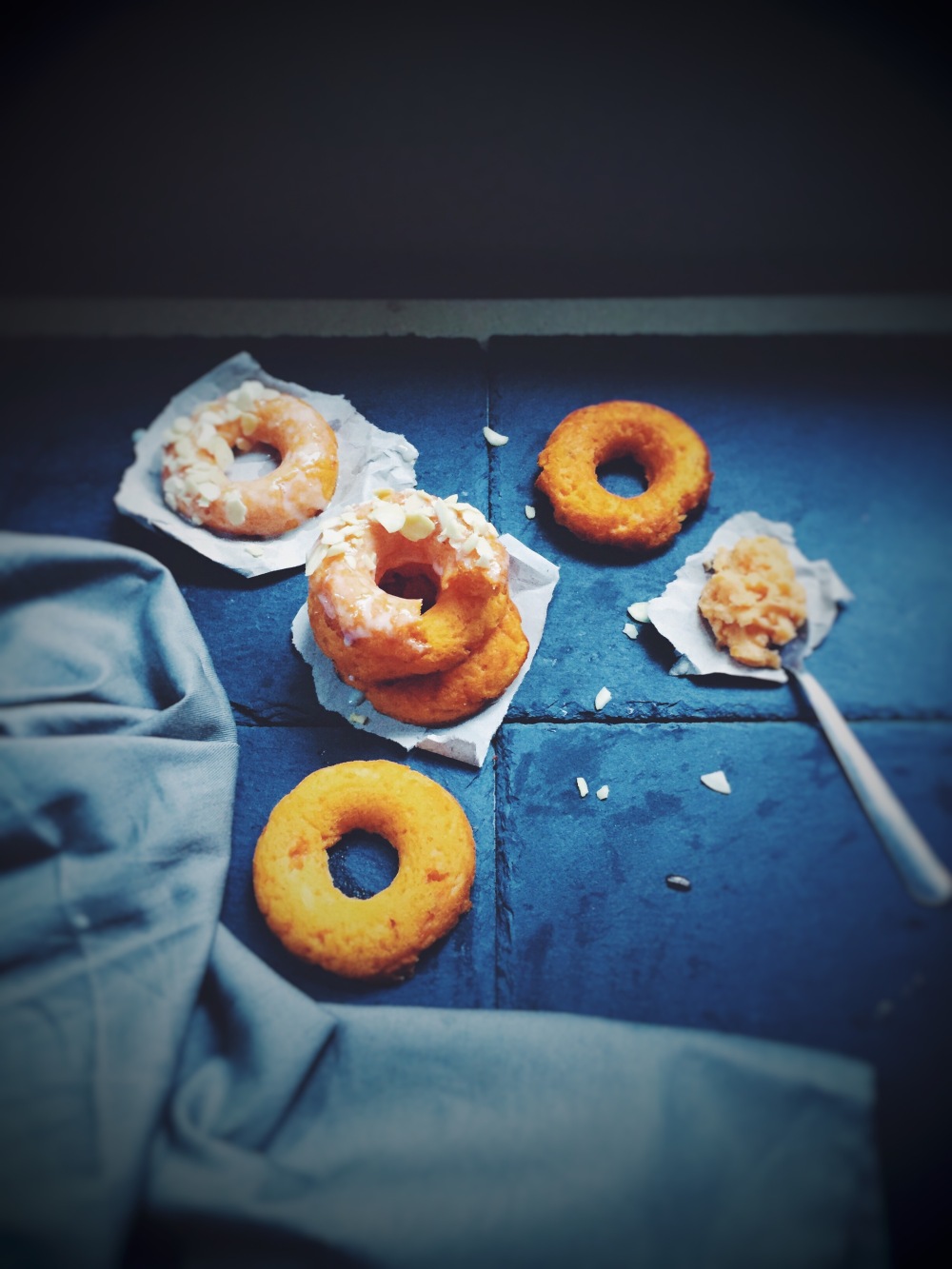 Definitely not your typical cakey baked doughnut, but just as delicious, especially if you’re into the whole chewy-gooey groove. Chewy-edged, tender and sweet in the middle. Imagine biting into a chewy date bar, but this time you get the characteristic sweet potato flavour, caramelised and starchy. Yessss.

1 medium sweet potato  (a Japanese yam works well too, you will simply get a different colour result)

125g flour (I used a mix of plain and gluten-free, though you could use either or)

Preheat your oven to 200C and roast your sweet potato until tender, around half an hour. Leave the oven on but turn the temperature down to 177C after the sweet potato is done. Place the sweet potato in a bowl and mash it with the milk, salt and coconut oil. In a separate bowl, whisk together the flour, baking powder, baking soda, salt, sugar. Tip the wet mix into the dry and mix until you get a fairly thick but moist consistency, Add drops of milk until you get to this stage if your mixture is too dry.

Bake for 12 minutes. There will be no obvious browning because there’s no typical Maillard reaction going on– the milk and sugars used in this vegan recipe don’t produce the same effect, and the colour of the sweet potato is rather overpowering. Leave to cool for two minutes before icing; as said before you can use a mix of nut milk and icing sugar before topping with flaked almonds (I like the texture variation with that shy crunch), or make like me and dip in condensed milk before the nut splatter.