An excruciating number of reviews.

Too little time, I say. And so I wallow in the woes of this routine world with an expression of doubt but heart of hope. I was up this morning and thinking about the raw freedom of the mornings, as I listened to the whurr of the air conditioner and buzz of the coffee machine. The toaster was ticking and my heart felt light. All before the dawn of another school day, all before a slew of assessments and analysis and faces; which I love, but weighs down heavy sometimes. Only really because the after-effect of a normal Sunday takes its toll and I feel mentally hungover. Then again, what on earth is new? Time passes and these motions carry on with you trapped in the tide. Forced to flow.

But Saturday. Saturday always holds such heart-pounding possibilities whenever it comes to foodie adventures. Coming back to Robertson Quay that afternoon was a familiar yet almost dangerous encounter, since the possibilities were endless. I was nauseous with ringing starvation which drenched my entire body and soul with an aching melancholy. I only wanted to eat and eat and be stained with a brimming satisfaction, though not sickness.

i swear I was heaving and sweating with hunger by the time my mother and I literally rushed into this open Italian restaurant, surrounded by the gregarious native people of Italy and the soft waters snaking down the river. We sat right under the fan, away from the ignorant smokers. It was a rushed decision which went something along the lines of:

“Hey mum look this looks rather appetising I heard Bella Pizza has the best pizza in Singapore but hey food let’s sit down here instead.”

Mother: “Um alright… Italian?” (she knows that would never typically be my first pick)

Crunch, chew, crunch, chew, back again and maybe chew a bit more just to get the rings of tender rubber down.

But delightful in both taste and texture. That salsa had the right tang without being either too thin and salty. I got the case of one dribble too many, but probably only due to my breakneck pace and clumsiness (I should never, EVER go anywhere too hungry or I’ll ruin a perfectly prim night out. Atrocious.) That calamari of course, was tender and may I even say a little fluffy. It was good squid, and I could see why the only other customers aside from an Indian couple were all Indians, open and full of gung-ho at best. It felt good to know that this is where they come for a quick and true Italian fix. 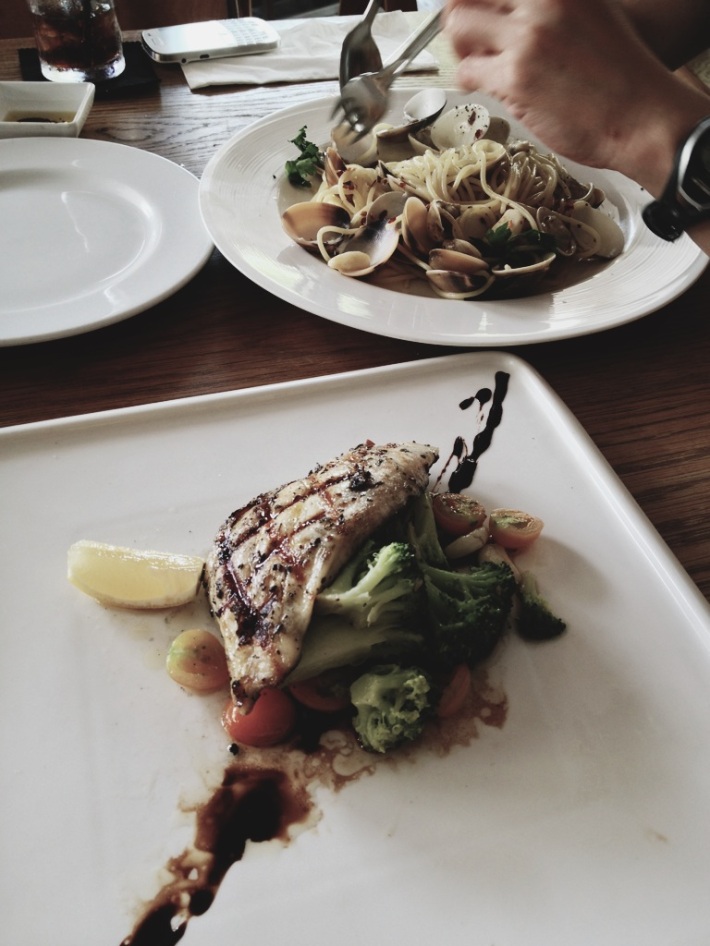 The mother attacked the latter and I, the beautiful fish. Because well, fish. Also because I wanted to pick at the bread and my mother’s delicately twirled mound of shiny pasta strands (the joys of mother-daughter bonding sessions). For almost $30, I got a minute portion which only satisfied me with the addition of that luscious but slightly too oily balsamic. Thick oil drops lazed about in excess on every inch of the dish, but yes, the fish resembled a shiny piece of ivory silk which broke away in delectable flakes of oiled flesh.

But no. It didn’t throw me off any board. The linguine was better, I thought, with rich and affluent clams sliding out of empty shells. Beautiful little creatures. I’d like to imagine downing 10 at a time, like I would do onions. Lovely, really.

This stuff was good though not excellent, and most definitely not worth the appalling price. Even the gelato only came in three flavours (chocolate, strawberry and vanilla), and at a supposedly homey original Italian restaurant! Come on.

Quality is mostly there though, and I enjoyed the rosy-cheeked, round-bellied waiters bustling to and fro.