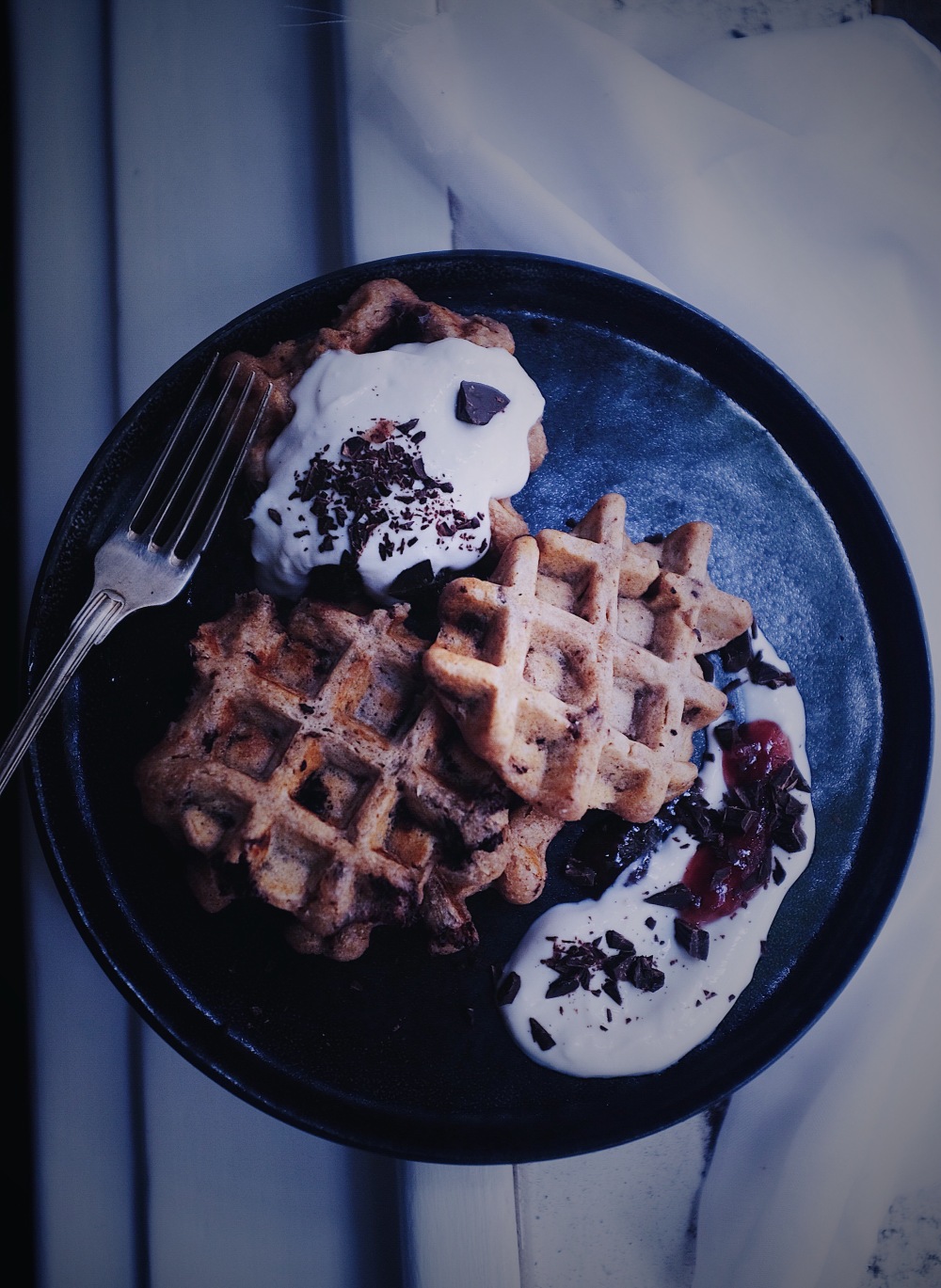 Back home in London again, after a long summer. The past few months have truly been something, and as my thoughts spin faster than I type, perhaps just jotting down a few highlights would be slightly more comprehensive. 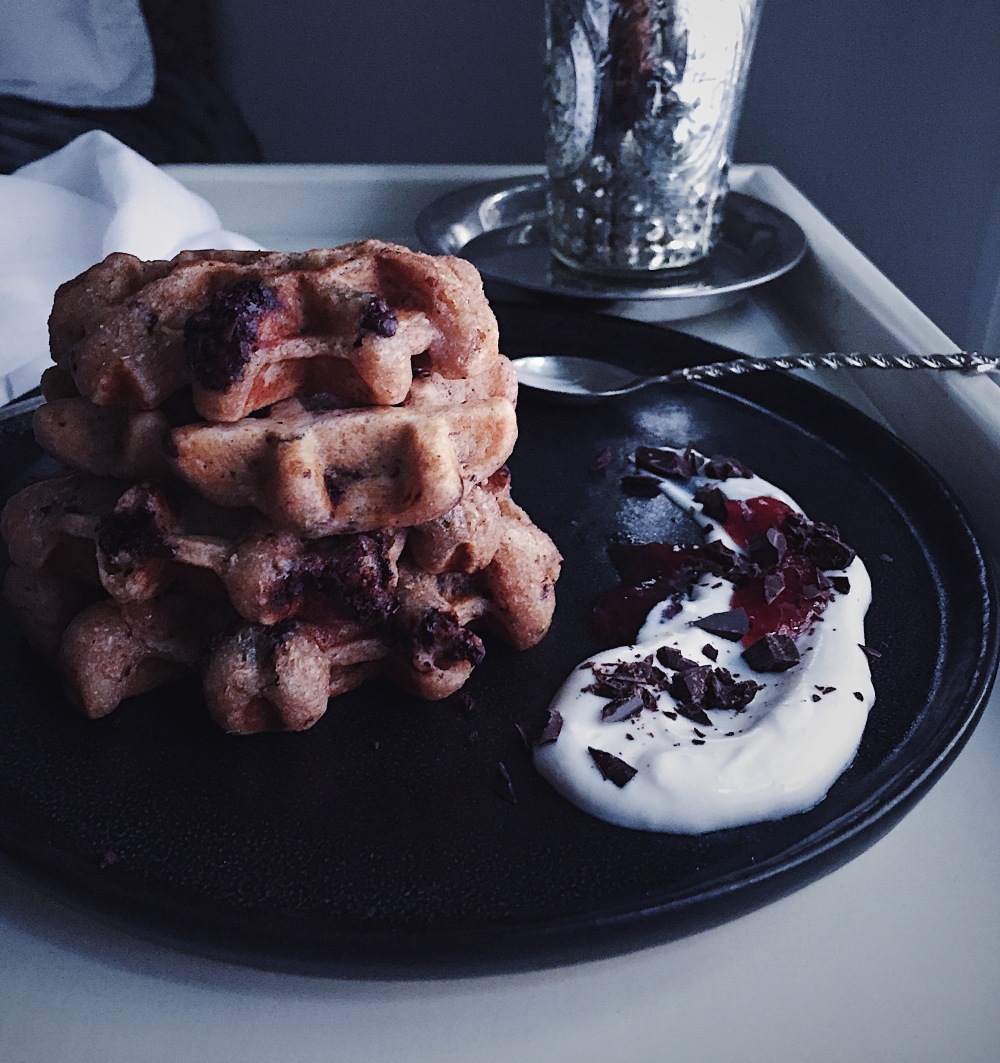 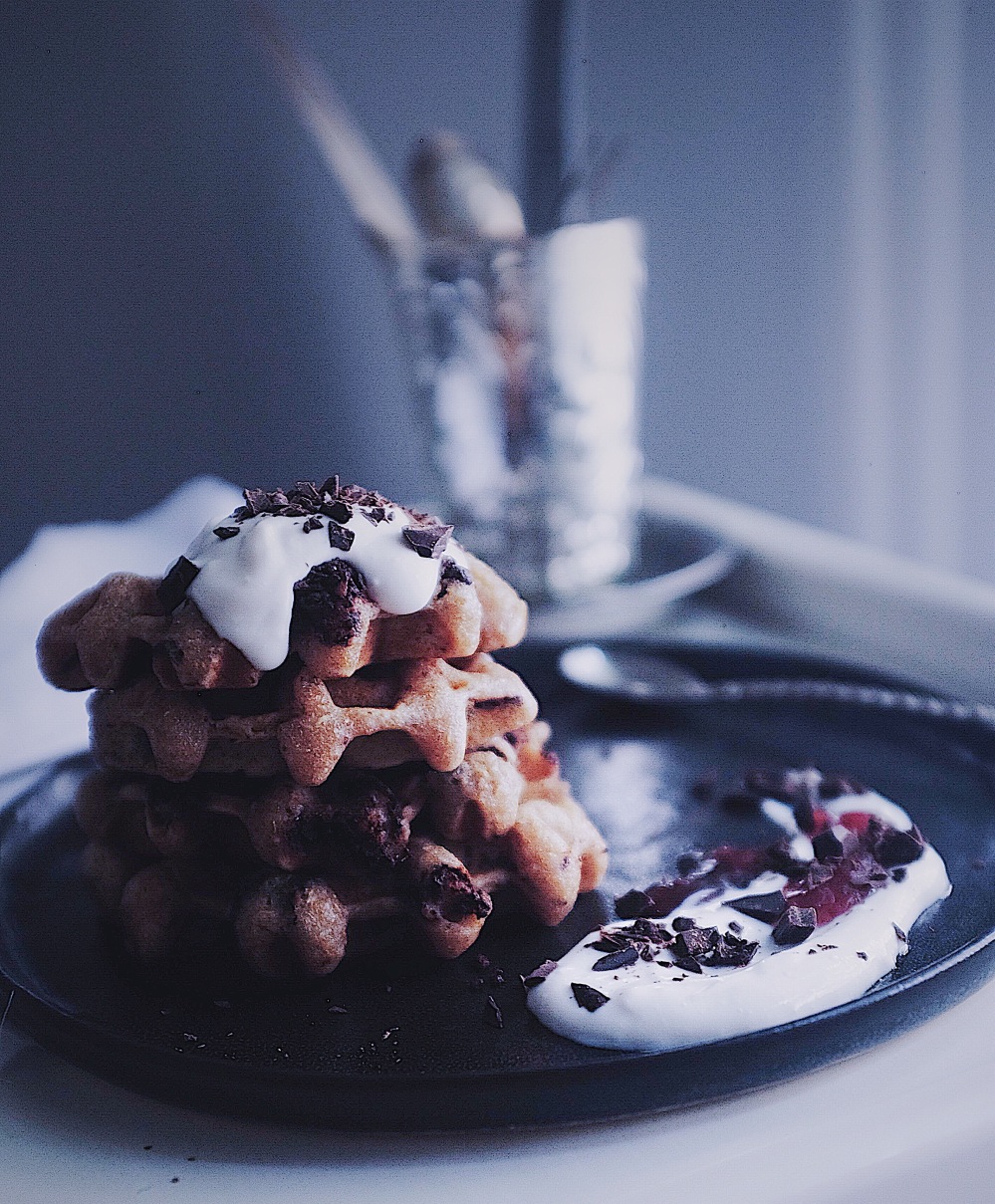 Not just any plain old American-style waffle (although there will always be a case for that, and one will always be partial to that classic combination of butter and maple syrup), no. It’s a waffle with class, with taste, but all in good measure, not stuffy in the slightest. The earl grey lends a note of sophistication to the sultry blend of spelt and chocolate. Who knew spelt made such a good case for your Sunday stack? Not I, not I for too long a time. The nutty, almost sweet angle to spelt has made it popular in more and more dishes, both sweet and savoury, recently. Although it’s not gluten-free, its relatively low in gluten, making it easy on the abdomen for the more gluten-sensitive of you. It is incredibly rich in many B vitamins such as niacin (like mushrooms!), protein and minerals, and even used to brew beer in Belgium and Bavaria. If you’re not convinced by its versatility, then check out these waffles. They’re perfect in every sense of the word in waffle world– soft and chewy all the way through, and golden-crisp around the edges.

These are truly one of the best waffle recipes I’ve developed. I have always wanted to experiment with spelt, but the combination of earl grey, chocolate and fluff makes for something so wonderfully extravagant yet humble in the simple shape of a waffle. Easy to make, and take no time at all to cook. Compared to my other waffle recipes, these take less than a minute to cook fully– how sublime is that when you’re cold and starving on a weekend morning?

They pair magically with coconut yogurt, more chopped chocolate and strawberry jam. Maple syrup isn’t necessary since the waffles themselves are relatively sweet, but go for it if you wish– I understand than some liquescent element is necessary for it to feel like a Sunday sometimes. 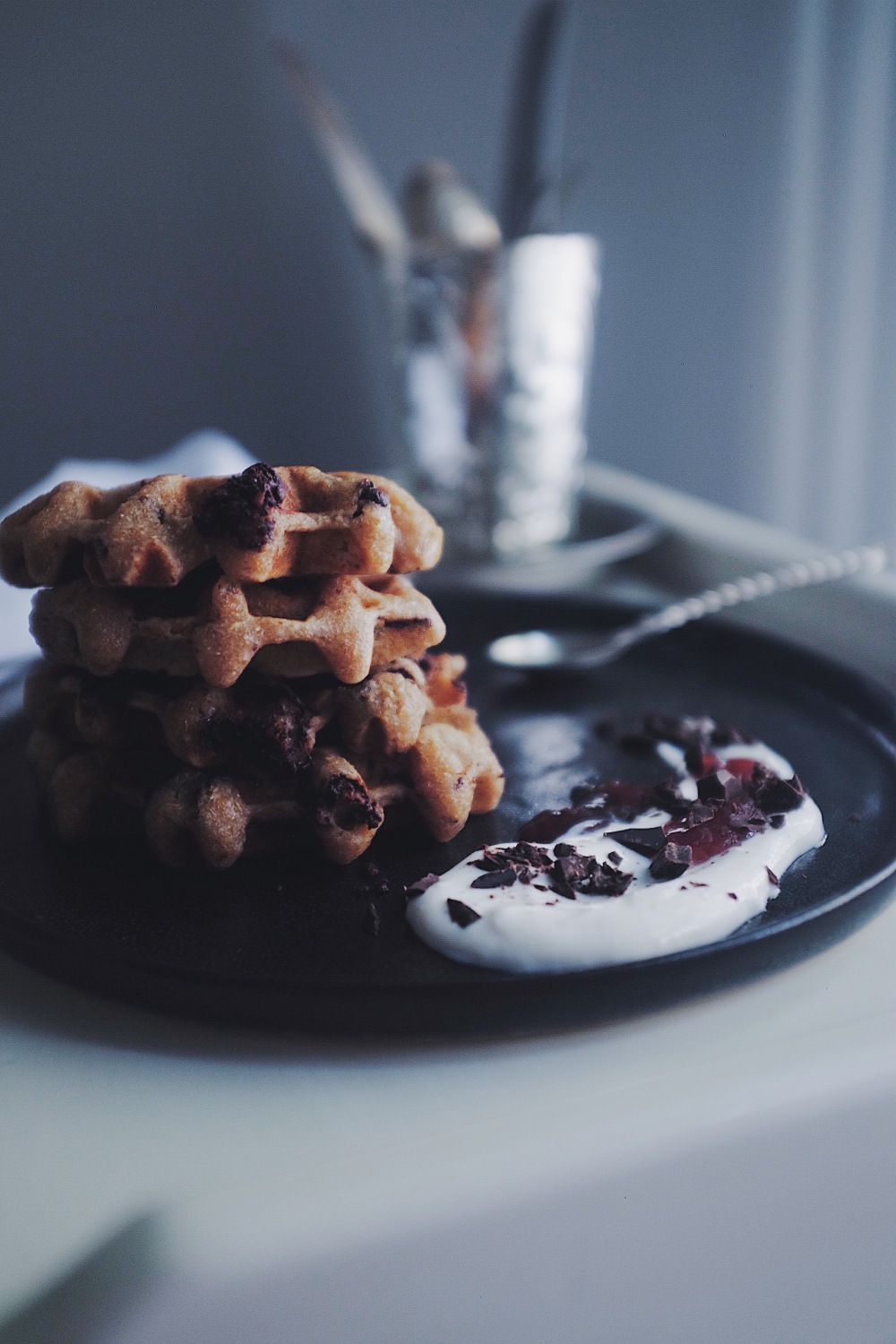 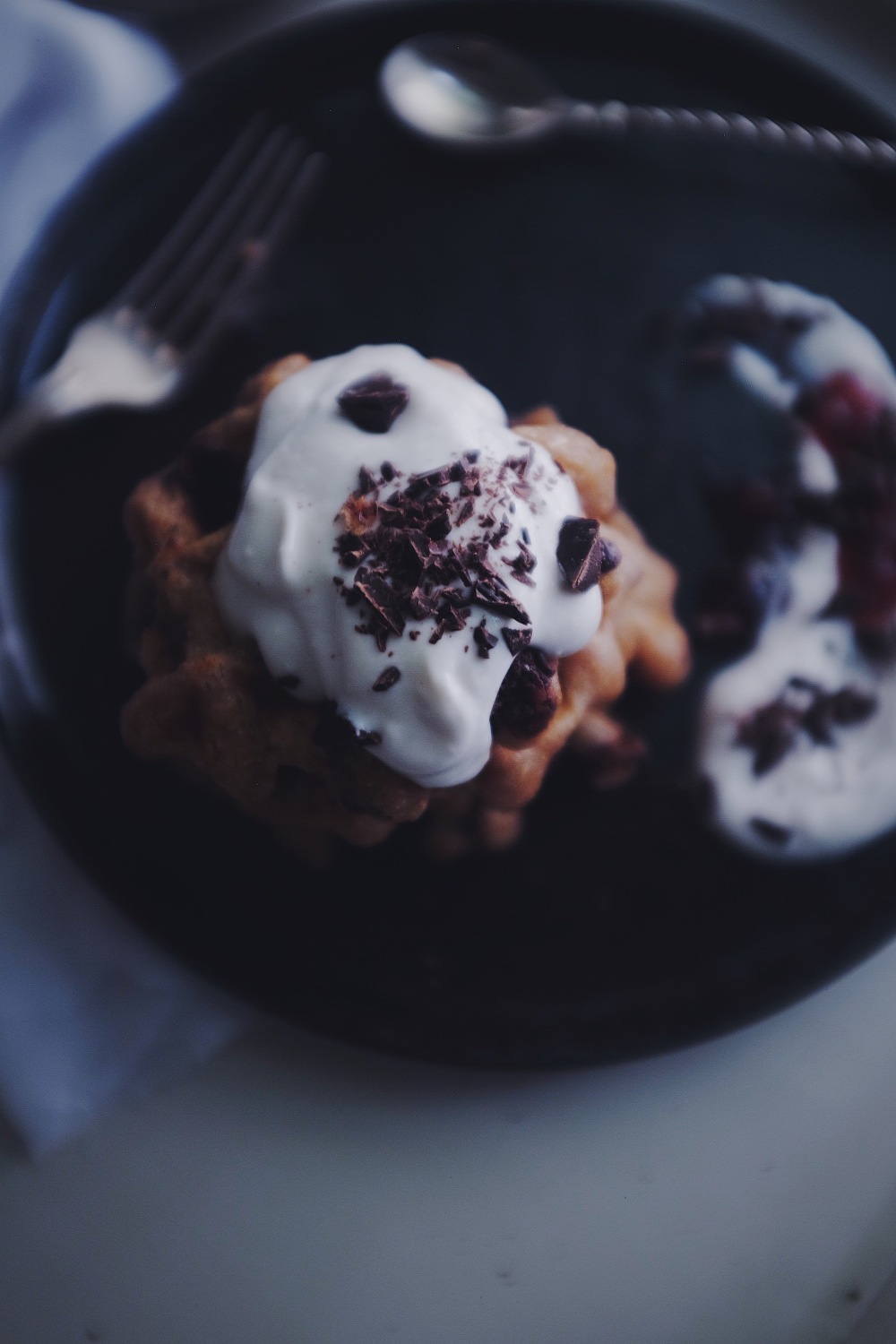 130g spelt flour (use plain if you wish, but spelt will make your waffles softer and chewier)

80ml milk of your choice (I used almond)

2 tbsp oil (any type such as vegetable/ rapeseed/ coconut/ sunflower)

2-3 tbsp earl grey tea, made by steeping your favourite earl grey tea (loose/teabag) in hot or boiling water for a couple of minutes

Preheat your waffle iron according to its instructions. In a large bowl, whisk together the flour, baking powder and salt. Then add the rest of the ingredients, the chopped chocolate going in last. Mix until everything is evenly incorporated, but don’t overmix the batter as this will result in rubbery waffles.

Liberally grease your waffle iron and place two heaped tablespoons of batter on the hot surface. Press the lid of the iron down and let the waffles cook for 30-40 seconds. Check if they’re golden and crisp on the outside by carefully lifting the lid. If not, let them continue to cook until golden-brown. There should be melting or cooked bits of chocolate all around the edges… yum.

Carefully remove the waffles (use your hands if you’re daring, and a fork if you’re not stupid) from the iron and place on a paper towel to let them cool while you handle the rest of the batter. Serve with coconut yoghurt, fruity jam and a little extra chopped dark chocolate. 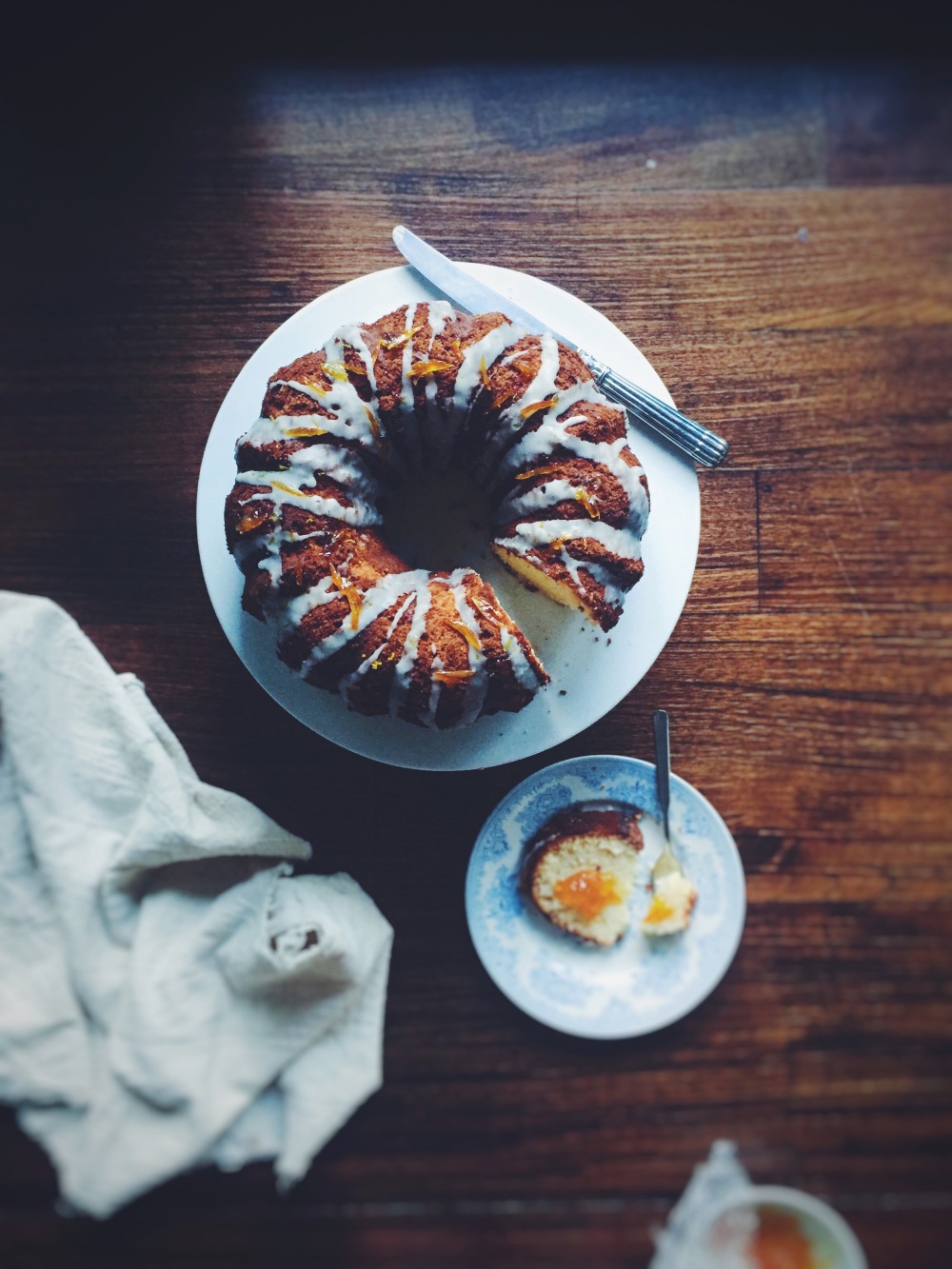 A little twist never hurt anyone. 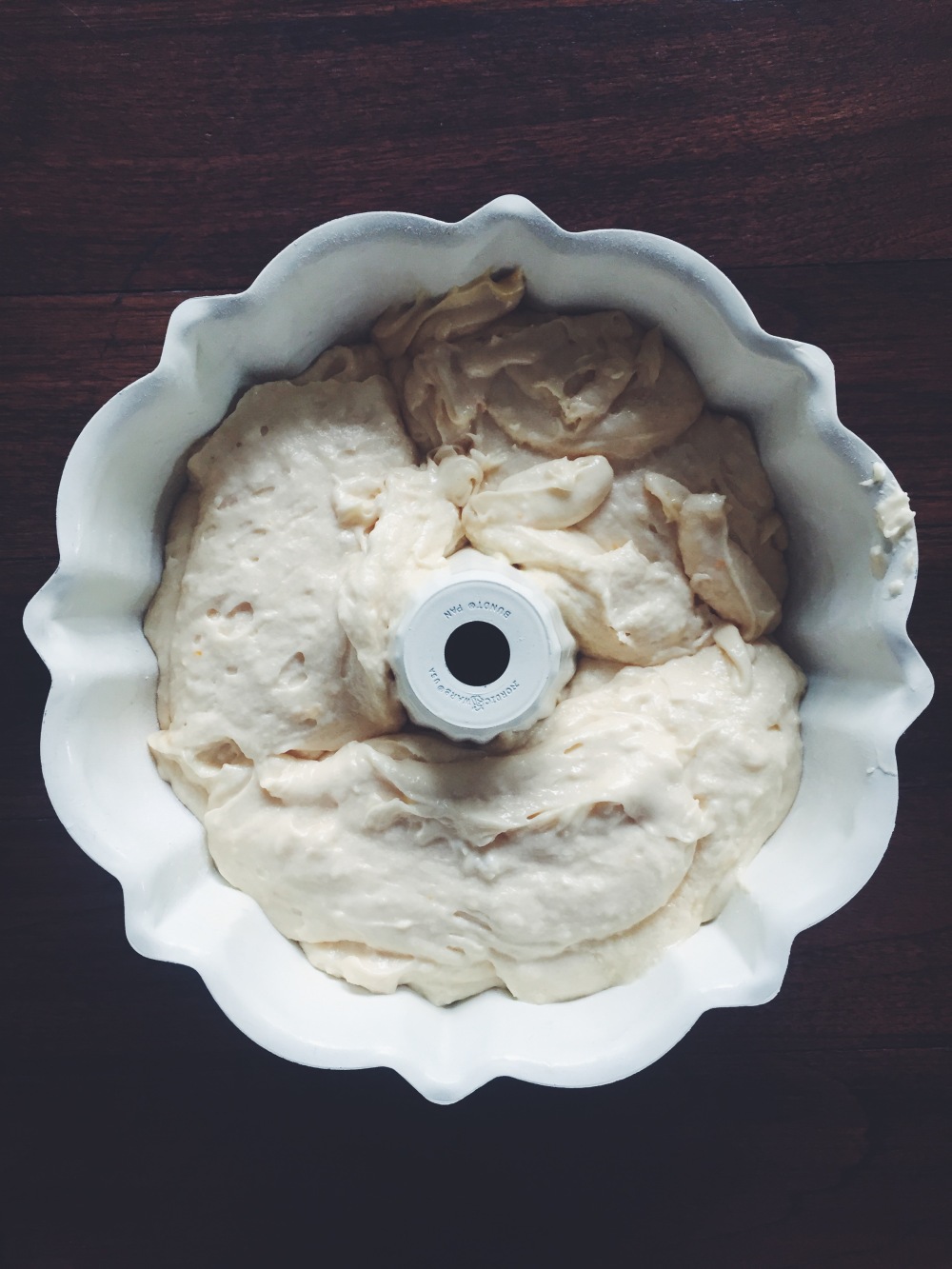 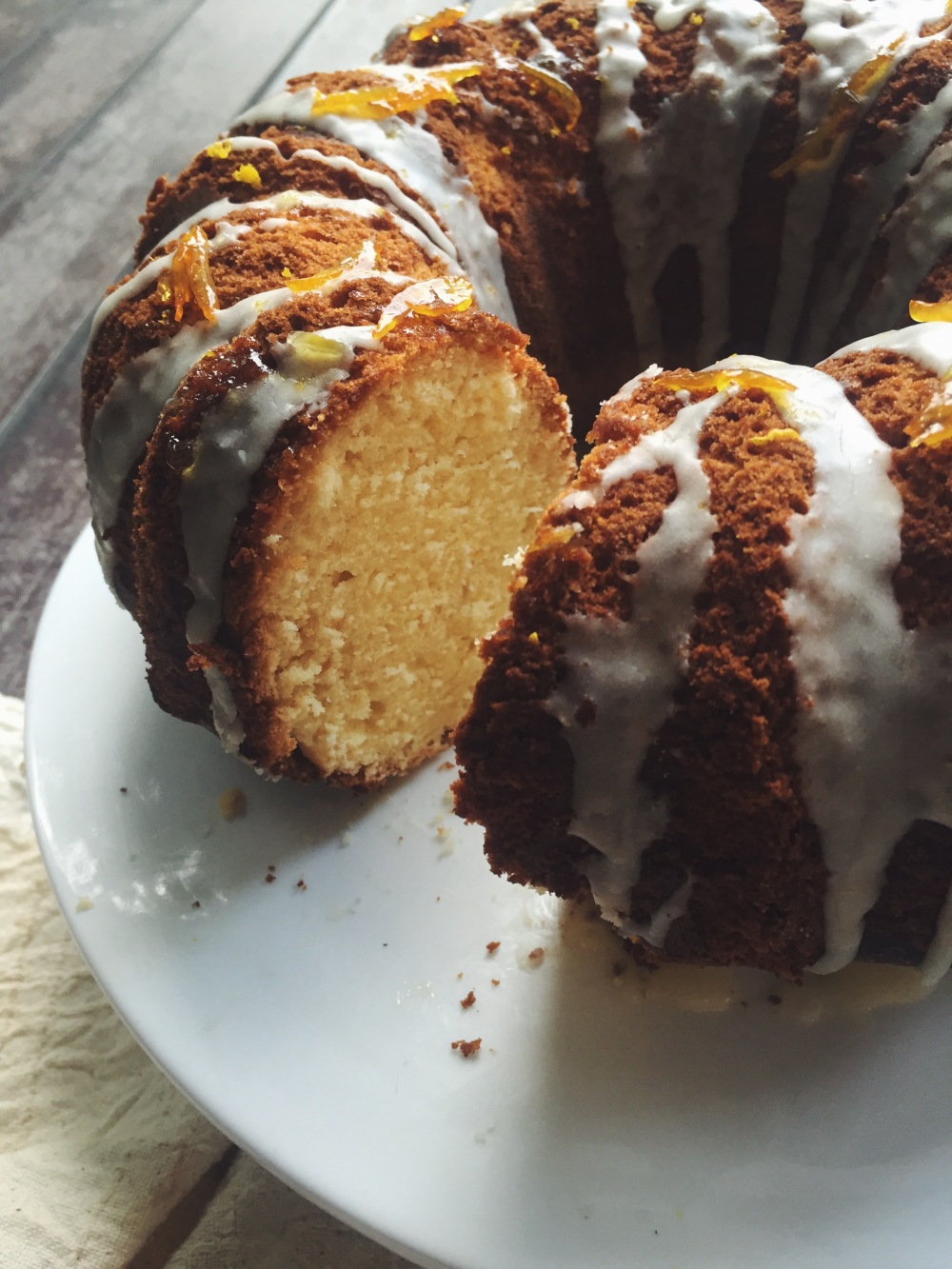 My hesitant sister picked at the top of the cake (which is actually the bottom) in wonder. I pinched a bit off myself and heaved a sigh of relief. At both the final crumb, and the flavours present. One would think pairing two tangy ingredients wouldn’t do much for either of the two star flavours here, but this couldn’t be further from the truth. . In each bite, you get the fragrant tang of orange, and the more sharply, savoury-dish-salty punch of miso. The ultimate hit of umami, only partially disguised by the sweet, light background of fluff. On a side note, I only recently discovered that miso is made by fermenting soybeans with salt and a peculiar-sounding fungus (Aspergillus oryzae). Soy has taken a backseat in my experimental repertoire, but it’s making a furious comeback, and one that I welcome, at that. 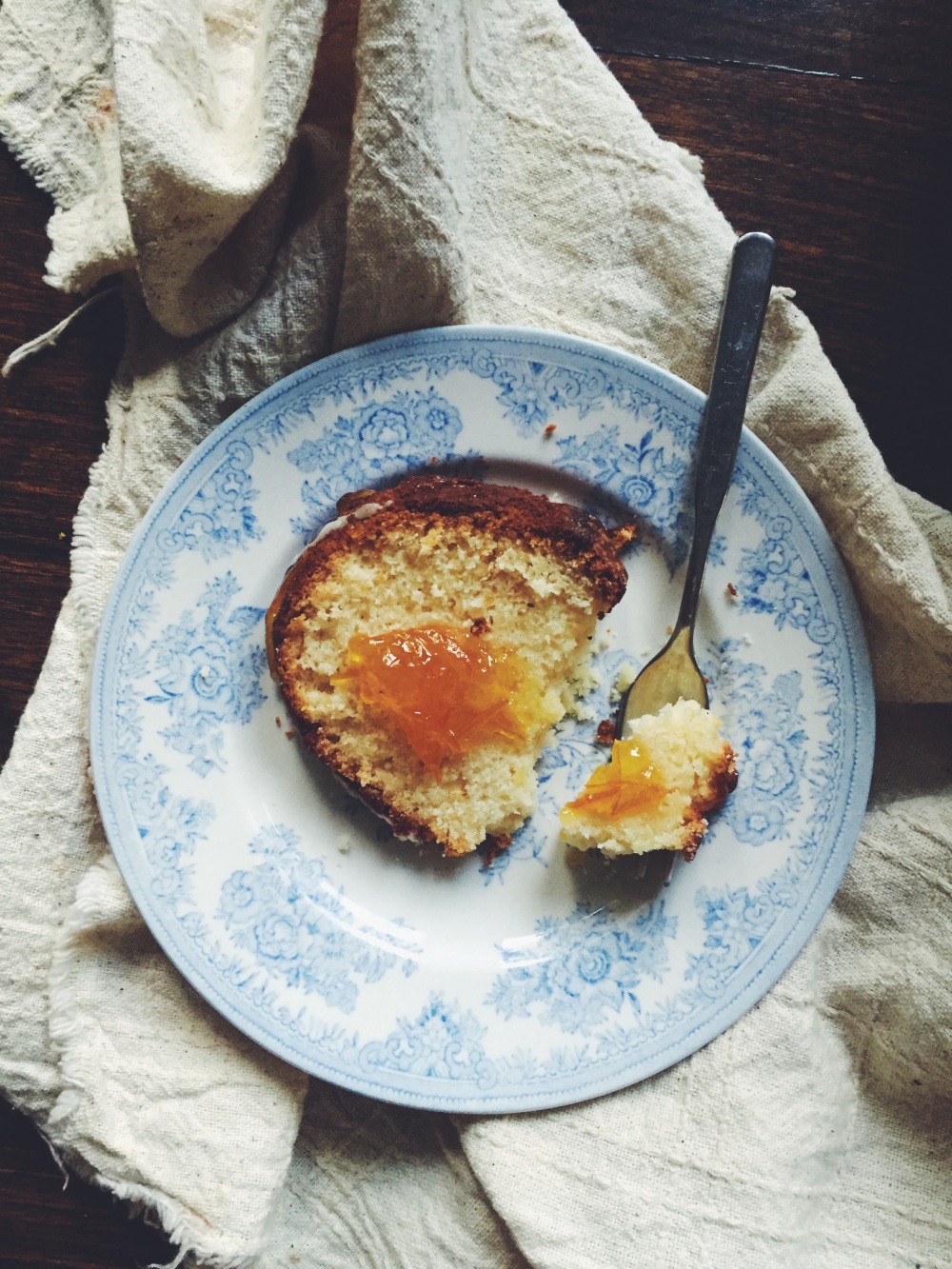 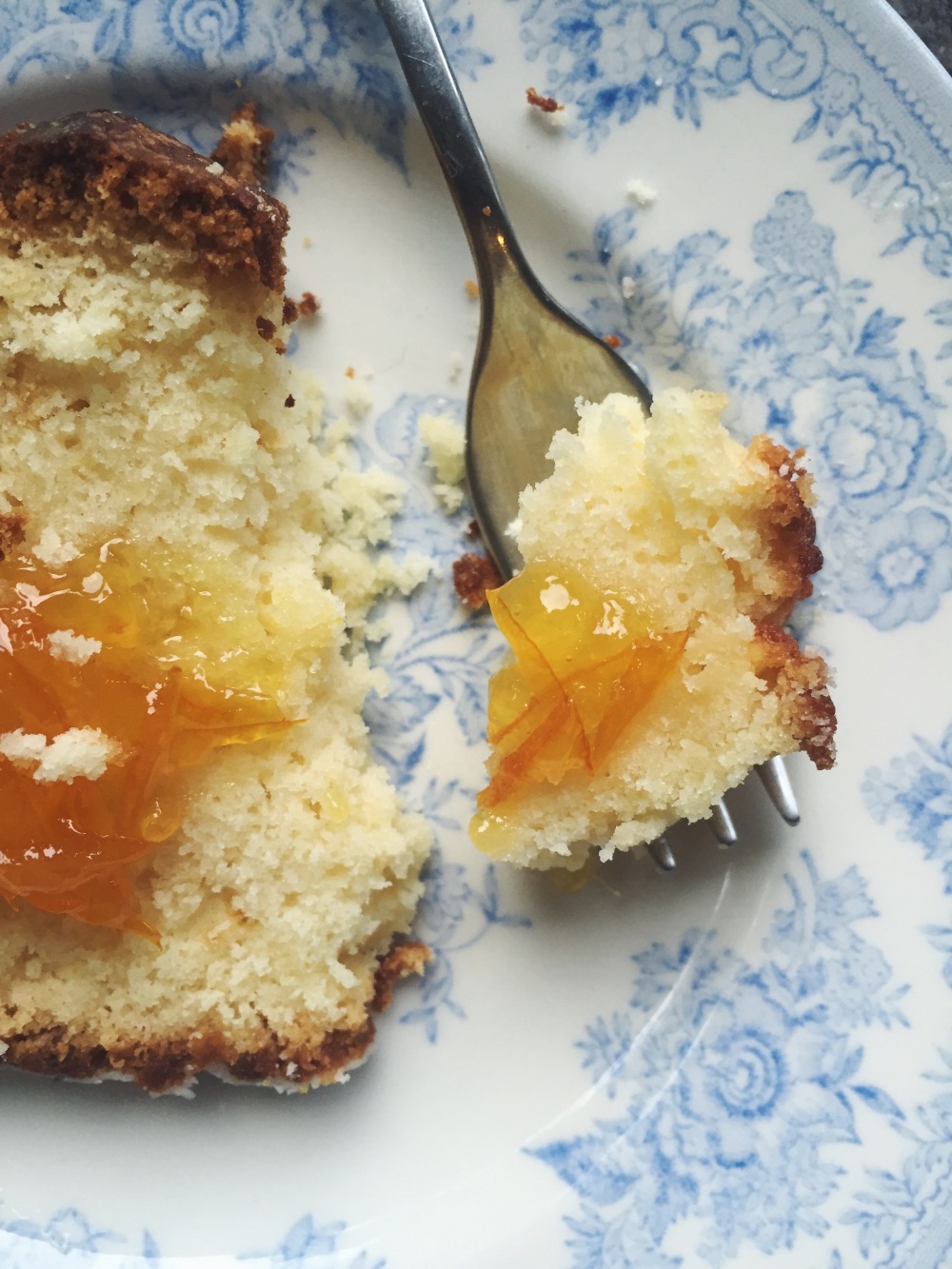 It’s more of a pound cake than anything. Dense yet fluffy, which I attribute to the cake flour used. I did debate using normal all-purpose flour, and you can go ahead and try substituting that for the cake flour here, but it does make all the difference in producing a fairytale crumb. The best bit, in my humble opinion, is the outer crust, which is both robust and partially caramelised. The crust sings strength, so much so that I needn’t have to bother with cutting the top, for the firm bottom meant it could rest flat on the cake stand without unduly collapsing. The rise from the oven did produce some cracks, air pushing through a firm golden canvas, but these only helped the penetration of marmalade when it was warmed through and brushed on post-bake. What I was most happy with was that glaze– of stronger miso flavour than the cake itself, adding a bite that would otherwise be too pronounced in just the cake. The marmalade glaze is optional, but it added to the citrus theme, and the slivers of rind looked a picture on top of the crumbs and brown.

Just now I sat down to a thin sliver of the stuff, and discovered the burst of savoury flavour enveloped in a smooth, sweet body of cake goes perfectly with a simple scoop of plain vanilla ice cream. Family helped mop it all up. Yesterday I made a cake, and it was simple, and so so good. Not much else (aside from a very well-written paper or book or walk) makes me just as happy and satisfied.

120ml buttermilk, homemade or store-bought (to make: add a tbsp of white vinegar to your measuring cup or beaker, then fill to the 120ml mark with milk, and let sit for 5 minutes to let the acidity work its magic)

Preheat your oven to 350F (177C) and grease a bundt pan. In a medium bowl, whisk together the flour, baking powder and salt. In a large bowl, rub the zest into the sugar. Add the softened butter, and use an electrical whisk to cream the butter and sugar mixture until light, white and fluffy, about a minute. Beat in the eggs. Add the flour, buttermilk and orange juice, and beat until you get a uniform, pale mixture. It should have a thick, dropping consistency. Finally, beat in the miso. Pour into the greased bundt pan and bake for 60-65 minutes. Mine was done at the hour-mark.

While it is baking, whisk together the ingredients for the icing and set aside. Once the cake is done, poke a few holes in the top, then brush the surface with marmalade that’s been warmed in the microwave. Leave the cake to cool for half an hour, before turning it over onto a cake stand, and drizzling (however you like) with the glaze.