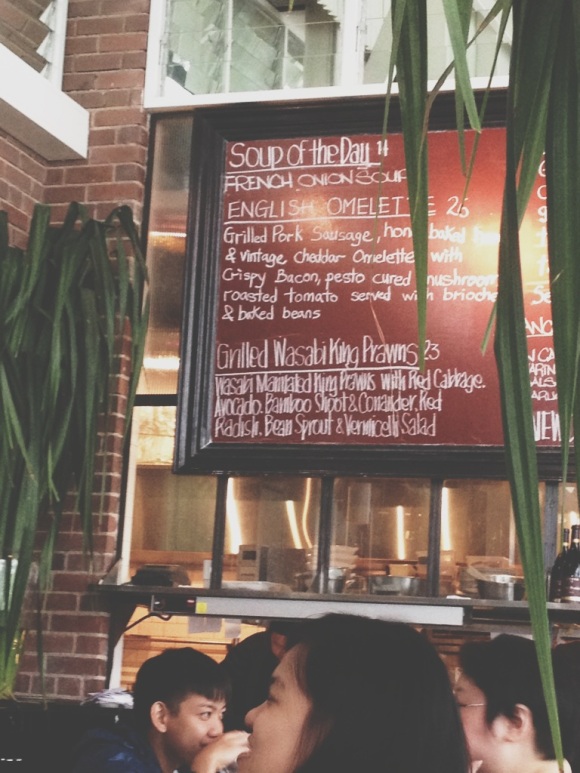 Third (lastly) for coffee and desserts. And yes, those are meant to be placed in that specific order. I also appreciate how these lovely people bother to whip up some homemade baked goods to display at least a tinge of Mr. Flourman experience as well as the ability to hold up to a name, and keep it. Efforts=appreciated.

They are not an artisan bakery, so wasn’t expecting much when given a sourdough loaf. It held a fraction of the desired tang in a good and hearty sourdough, though its papery skin did not give way fast, and it took quite a while to finish in the house. Yes, minorly impressed.

I went last Saturday to catch up on some mother-daughter time (no, I am most certainly not the mom here), and ordered a cappuccino to start.

Please don’t expect a 6-star rating with their caffeine shots. The cap was satisfying though a tad too milky for my taste, and comes with a little biccie to dip into the coffee (hidden in the photo above, though I wouldn’t bother with stale ochre nibblets to begin with).  Props to the beautiful latte art, though. One seriously requires a steady hand to master even the slightest pattern!

So, given the brunch menu at 2pm that day, I believed it only fitting to satisfy my belly with a nice Eggy Benny.

Yet somehow, after yoga, all I really crave is something monstrously fresh and healthy.

Like, yes, a meagre salad. But thank goodness for good and hearty salads here at P.S.. I got the P.S. Caesar with rosemary honey dijon chicken. I awaited some gorgeous spring green, parmesan-smothered plate with a wobbly poached egg nestled among the greens, accompanied by lashings of shredded chicken in and amongst every nook and cranny.

I was instead greeted by a sausage-like chunk of chipotle chicken on a stick. Yes, a stick. I expected that stick to be dry and unbearably unpalatable, but once again (surprise, surprise) I was just wrong. Spot the pattern in my flawed perspective on chickens, yes?

Egg was well done, dressing was ample, and the chicken was rather easy to pull apart and savour in small bites (you know me, all about savouring small bites). A good salad overall.

The mother got banana pancakes which, quite honestly, were rather dreadful. Zilch full picture here, but the stack of four was terribly pretentious, like a peremptory schoolteacher dressed in honey (you can see it in the background). Pancakes were dense and bland, and the caramelised bananas cowered in the yellow banality of the stodge, not doing much to help.

We then shared a lemon and florentine cake.

For those who wish to know, florentines are a moreish concoction comprised of candied fruit and toasted nuts. A dessert granola, more like.

Now the florentine was a tad too sugar-coated.

That magnificent 3-pound baby is literally bursting at the seams with candied lemon liquor. Forget trying to make moist cakes. Just come here. Each bite beckons as I speak (or type, rather). The citrus is not a clean-cut lemon, and i would have actually preferred a more punchy flavour in the works. One might even confuse such a slice for a moist orange cake, but who’s to blame. This aside, none of this sweetness would work without the cold, melting ball of vanilla ice cream next to it.

I’d kill anyone who takes a bite of that cake without some of its accompaniment.

Cod’s good, though by no means impressive, from what I remember. A good fillet should be glossy and translucent, flakes falling away as they shy away from the touch of a knife, cutting like butter. Mildly sweet, the least ‘fishy’ fish of the lot.

You can’t have a non-oily cod, because that would simply be another cardinal culinary sin.

Of course, the famous truffle fries, which are only ever spectacular with great heaps of cheese and truffle. I never took a liking to fries of any sort, though if ever I reach for a second one, they must be golden, almost burnt and covered in either honey mustard or chilli.

Come with an appetite, come with a friend.