You know, it’s said they have the best pizza in Singapore.

I recollected my memories of Peperoni, that one red-walled, kid-friendly placed we used to frequent every couple of weeks for the paper tables and crusty, cheesy goodness of fresh pizza. How would this compare? My memories were insufficient, and in the end, i didn’t even order pizza. What’s wrong with you Alex. Prithee, reader, hear me out. There was a man at the front, tossing the crusts from board to plate, wafts of steam rising from the pockets between bounteous toppings. And yet, I noticed there was something a little off. 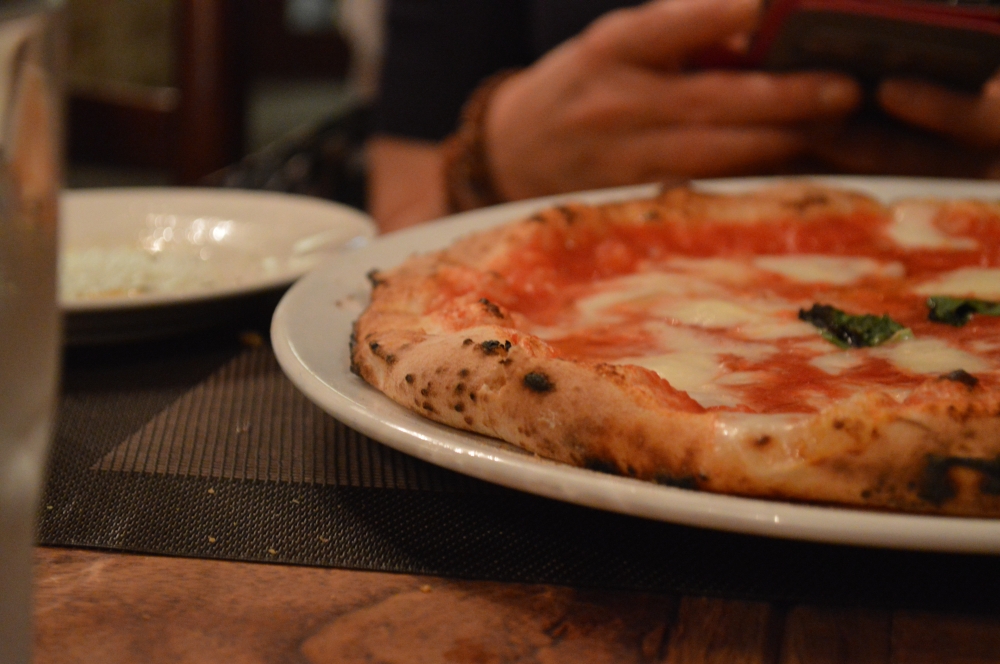 Atop, we have the classic Margherita. Below, their version of an oyster omelette, coupled with thousand island dressing.

‘Soggy’, remarked my mother. Soggy! Lord! And so my friends, that is how I ended up not bothering with the slicing and biting. I just couldn’t. The omelette was decent, but I noticed that they repeated dish components without a healthy conscience. The same dressing was used for the fried calamari, which you should be grateful isn’t pictured, as it was a disastrous mess of separating, soggy batter and putrid little rubber rings approximately a millimetre wide. The poor squids, without their decent spa treatment. The flavours hung like stale fog in my mouth.

The first two are part of a menu degustation which my father predictably ordered, given his larger-than-life appetite. The starter was underwhelming in flavour, but I sing praise for the squid ink follow-up. The clumpy cheese choked the minuscule bites of scallop to death, whilst the pasta was delicate and aromatic.

Now for that penne, some of which I stole from my sister. In my opinion, it beat everything else. Without a doubt. Up there. The al dente pasta boasted homemade earthiness, ridges catching all that rich, sweet and sharp sauce, imbued with a calmly spice, simmering with chunks of reduced tomato and herb. That penne was perfect, though if anything, they should reduce the amount of sauce to perfectly complement the penne’s loveliness.

Their fresh ‘fish of the day’, which was the sort of portion you would look at and go ‘hmph, alright, $25 it is then. But never again.’ Why? I could cry trying to recount this painful experience once more. Because. This beautiful fish arrived almost an entire hour after everything else was served. My mood was sunken, my eyes watery, my hands ready to rise in exasperation to the Gods. Not even those rustic grill marks could compensate for the cardinal sin. The grilled vegetables were sweet and caramelised, but doused in too much olive oil. The fish was flavourful, though humbug plain if it weren’t served with two types of salt and tomato paste, which was also too oily.

You can tell the first is a steak, but I should like you to zoom in on the second shot. Behold the duck breast with fruit reduction sauce and caramelised root vegetables, alongside the same (you see the repetition?) clump of al dente meditarranean-style mixed black rice. May I say this was twice as good as my fish. Flushed and tender, good sear along the side, with the sprightly, slightly gummy sauce basking in the bonhomous nature of the burgundy bed it inhabited. This and the penne were the star dishes that night. Sea salt caramel and almond ice cream from the Ice Cream Gallery afterwards, starring my sister’s lovely pins. I think it beats the earl grey and fig flavour, which possessed no roundness or depth. This.