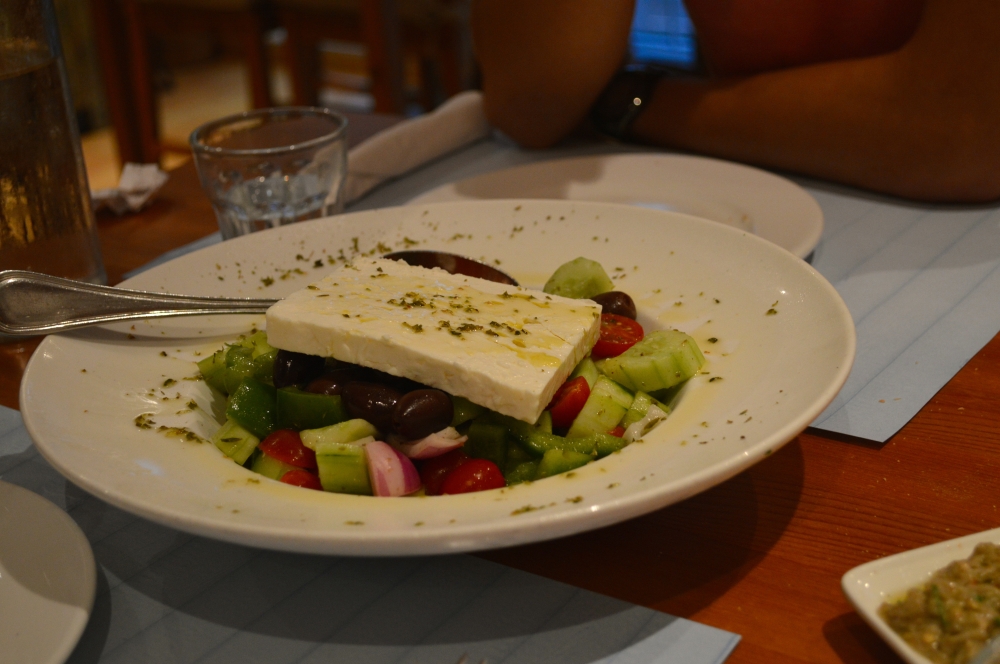 To one and all. I am no longer a Greek food virgin. I can now safely say that perhaps all I need to try now is fish sperm and bull’s penis and all shall be well and good. It was all rather hurried, a flash, a stop. Greek food sounded all right, the sort of thing drowned in olive oil and cheese and olives. Very nice. But the experience I encountered was more holy than satisfying, I swear on it. And I now understand the three classes of olive oil- robust, medium and delicate. Not that I need to or anything. But I like to fill my life with useless, pleasurable knick knacks.

At the top we have xoriatiki, a greek salad with olives, a lovely large slab of feta, tomatoes, peppers and cucumber. The zing held its appeal even in the pool of oily dressing which, of course, made it characteristically Greek, however I do think they could’ve reduced the oil factor just a little to let the freshness of the vegetables shine through. It’s never nice to have the taste of naked oil soaking the walls of your throat, nothing to cling to. And then, melitzanosalata. Or in english, smoked eggplant mixed with herbs. Absolutely moreish. The sweetness of the eggplant was mushed together with miniature cheese fragments and fragrant herb, though it wasn’t as dowdy or drab as a plate of mashed ripe banana. It held its own, even with the glugs of oil. The oil, the oil. First best dish of the lot award goes to this baby. Saganaki with figs. At 18 bucks, this was full-on gold. Looks are deceiving. The richness cannot be doubted, and was perfect for sharing between the 3 of us. Translation? Alright. Kefalotiri Psito with fig sauce.

Um. Yes. Basically, fried cheese with the sweetest, stickiest, most deliciously cloying fig sauce. I love figs. And so should you. The sharp twang of cheese did well in making you feel better about the sugary bath it was lounging around in. The tender cheese, a ledge of yellow goodness, was really a treat. Grilled sea bream. Squeeze of lemon, squeeze of hope, knowing my wretched, impenetrable love for fish. More specifically, fish head. I took that bit and that bit only. Left the rest to the boys. I can handle the rest. The was a sauce to drizzle everything with, though I didn’t see the need, as the excess olive oil distracted from the fresh grilled flavour and rustic charm of skin, flesh and innards. Naked was the way to go.

Bougatsa- filo and semolina cream rolls. The pastry was not as sweet as I expected, which was surprisingly pleasant when juxtaposed with the semolina cream, which filled up each nook of the pastry in the most rigid possible way. Firm and sturdy, not frigid and flowing, like how it sort of played out in my head. The cinnamon was a nice touch, but I think a cold inside, no matter how un-traditional, would have been dearly appreciated. Something cold and cream-like in texture would be preferable. Perhaps warm desserts aren’t my groove this time of night, especially after a 5-days dose of olive oil.