Nordic-inspired cuisine? Who would’ve thunk it.

So I went all the way to the Central Business District, walking along McCallum Street just to try out these guys’ sandwiches, and ended up totally going against that. Yes, I should’ve regretted it from the start. But I was just as satisfied. No really! Just listen, or better yet, go there yourself. Now. Tomorrow. Soon. Please. 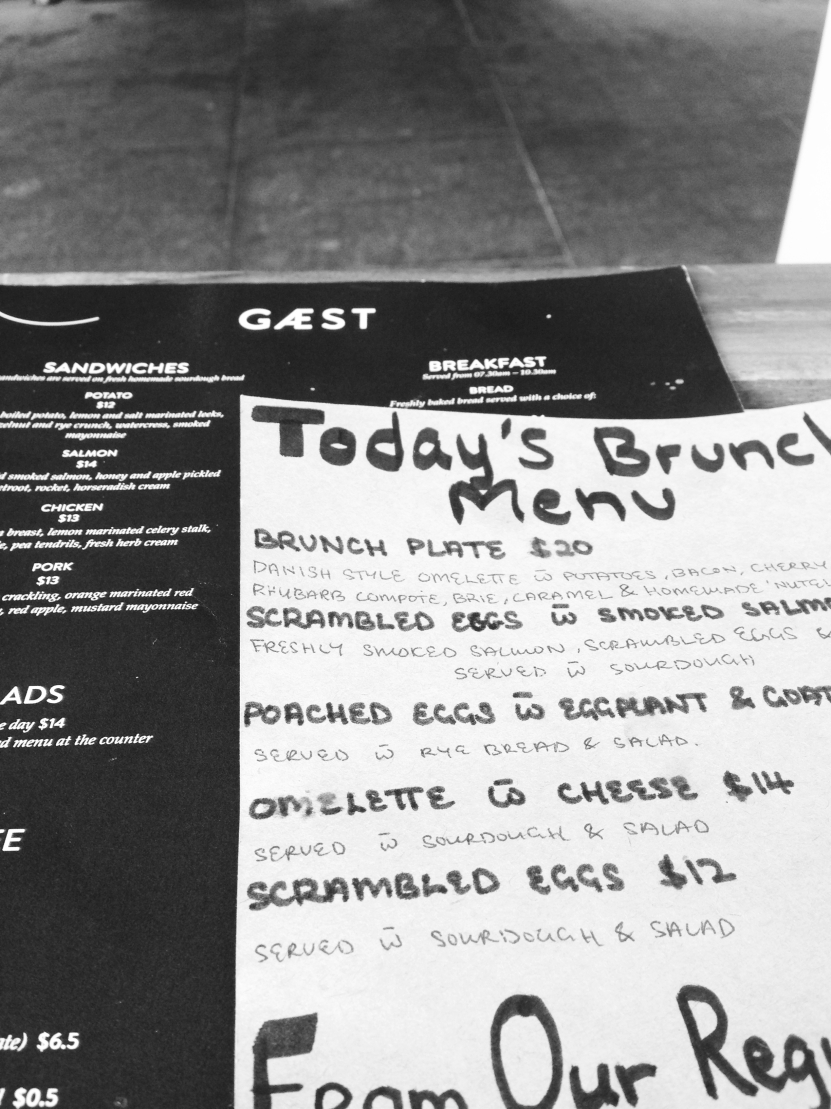 Let’s just say I wasn’t expecting it. I made my order, after a gruelling self-debate session. It’s the worst part every time I go on some solo adventure. Girl and Going Solo, with a large side of Indecision. I swear. But yes, my order: Iced cappuccino, and the poached eggs with goat’s cheese, eggplant, salad and their homemade rye bread. They had brunch specials, to my giddy surprise. And you heard that? Homemade. In house. Made from the heart. You can imagine how excited I was. Because you know bread and I go way back, and I adore the savoury twist of rye; its dense and wholesome flavour, packed with seeds, nuts and glory. I’ll try their sourdough another time, promise. 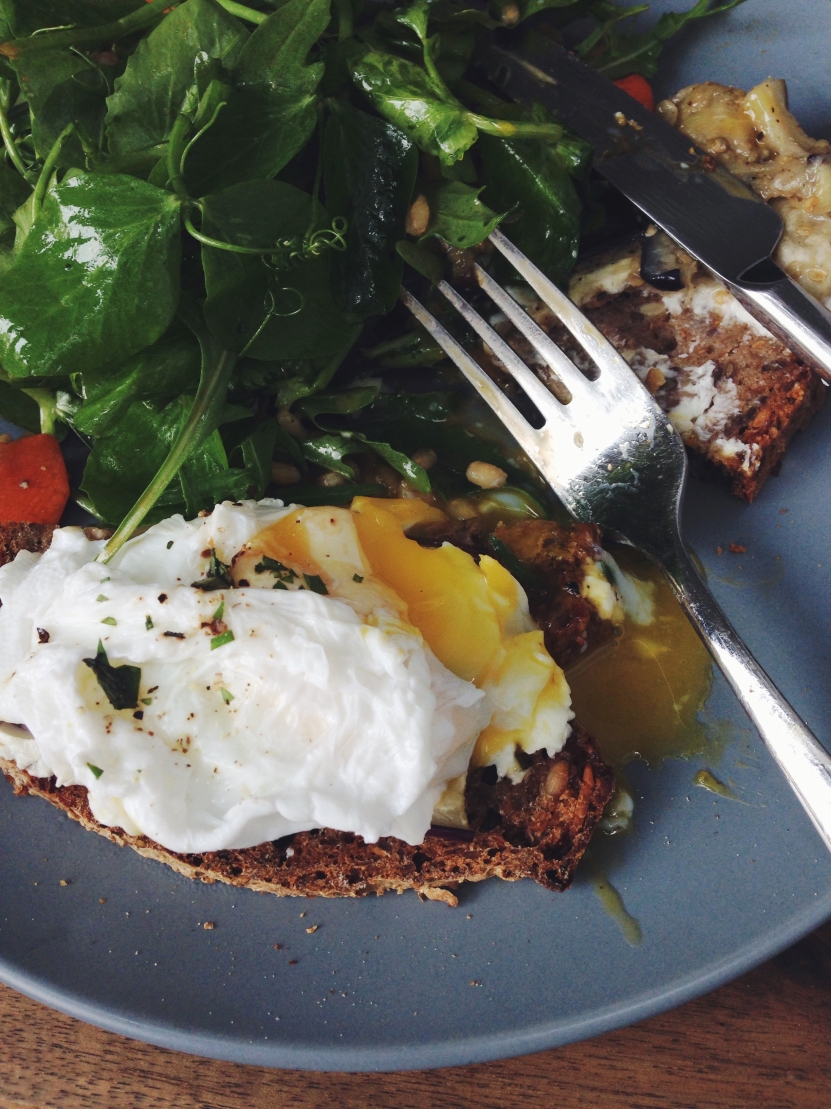 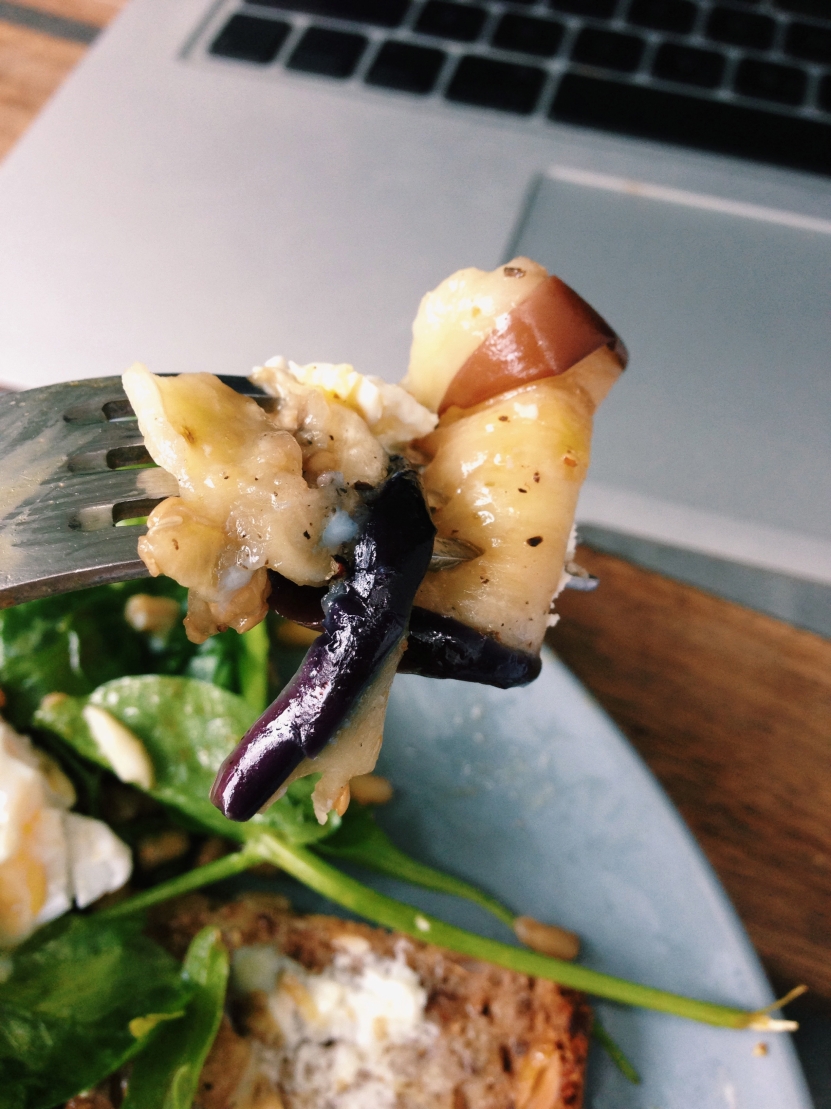 You just have to love time alone.

The drink came first, though the lady got my order wrong and gave me an iced latte at first. Didn’t take too long for them to rectify that, though. Perfect on that numbingly-hot late morning.

Ah, this dish. I poked at the egg’s belly, as per usual, and the flow of yolk almost made me sweat. It was quite beautiful, and I don’t exaggerate when it comes to poached eggs. I watch videos on them to make me feel better. Weird, I know. On top of savoury, moist eggplant and goat’s cheese. God, that cheese. I chose this brunch special in particular because of it. It’s rare that I get to eat something of the sort, you know. Or maybe it’s just because I haven’t chanced upon the right occasion to even try. The pictures above should say enough. I was initially worried that I made the wrong decision–ugh Alex, did you just pass up on the correct decision of sandwiches again??– but no, that right there was brunch-ful beauty, a coming-together of spectacular, simple flavours on a plate. And I kind of want to steal their plates, now that I think of it. My white home varieties are getting a tad boring, to be honest. Eggs and cheese aside, the rye was the best part, with its glorious brown crust, thin but dense texture and hearty flavour.

The salad it came with was all bright, lightly sweet, tangy and perky, with cherry tomatoes, carrots and barley grains. The light crunch of the latter complemented the bed of greens, all dusted with the kiss of a sweet and lemony vinaigrette. The fronds and tails and tendrils all clumped together, but all that did was make me eat it more politely. I’m still improving on the caveman streak. T’was good.

As you can tell by its less-than-perfect corner, I couldn’t help myself by the time I got home, especially after walking all around Singapore (that’s another story). At first glance, I wasn’t expecting much. I bought this square of a dark beauty on total impulse. I was only telling myself that hey, I’m hardly around this part of town, so why the heck not. Can you see the moisture painting a soft glisten on the fudgy belly of that thing? Gorgeous, fudgy, but not too dense. Much more fudgy than chewy, and the chocolate is on the milkier side, despite yielding a mighty rich flavour. They took this brownie seriously, so I did too.

I really like it there, and I was actually able to get some work done. The fact that almost everything is homemade gives it an edge over the sprawling maze of other cafés and restaurants in the area. Highly impressed.