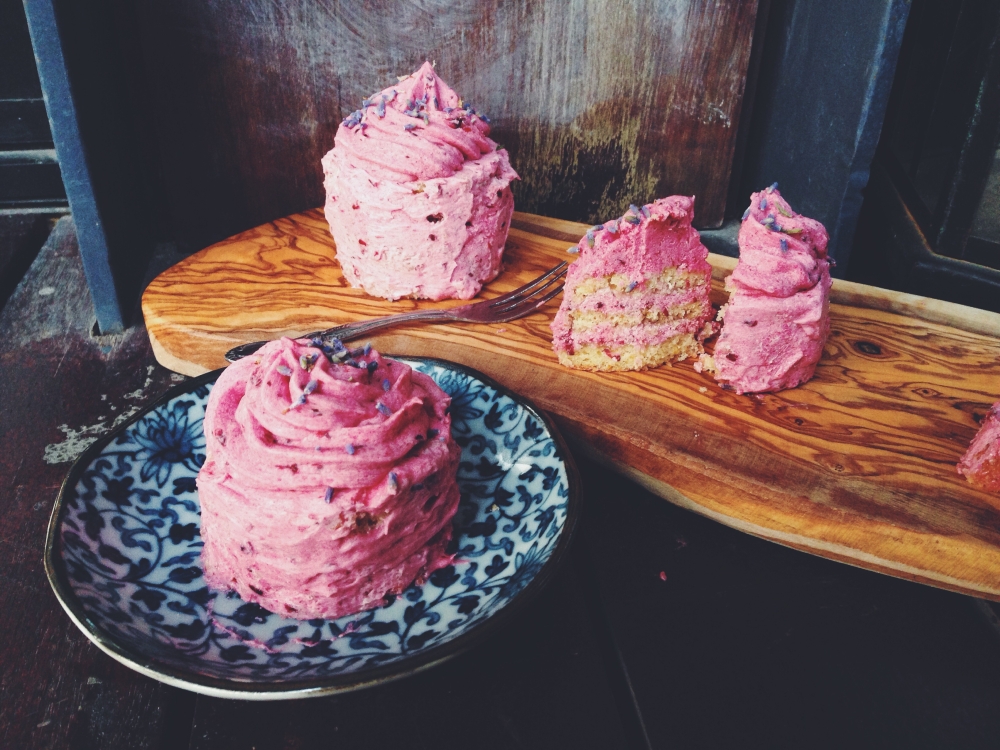 I’ve learnt a few things in the past few days. Firstly, it is actually impossible for me to do a tripod headstand. I’m sure this is a familiar term for all you yogis out there. I’ve been practicing yoga for years (to be fair, not so much during the later years of high school) and I still haven’t mastered it. It bothers me to no end.

Secondly, 1984 is almost blowing my mind. Not the literal 80s, of course, but Orwell’s magnum opus. I’m almost done and can’t wait to get my hands on Animal Farm. Sadly, I’m pretty slow with the classics.

Thirdly, right about this time of year, I feel completely and utterly at ease. Yet, I’m perfectly aware of the fact that way, way too much suffering is going on in the world to be ignored. Everyday I go about my business– practicing yoga, journalling, a little revision for my future course here and there, baking (what’s new!), fretting about hair and makeup… And all around me, bombs are dropped, little ones suffer, the clocks stop ticking for thousands, millions. With all the privileges that surround me, it’s easy to take things for granted. To continue living in a bubble of selfishness and oblivion. I just hope most people in the world are more.. aware. That’s all. Me included.

I shall now proceed to wax lyrical about my favourite (orange) cake recipe in the world. And that says something because I’ve made a fair bit of cake in my lifetime. 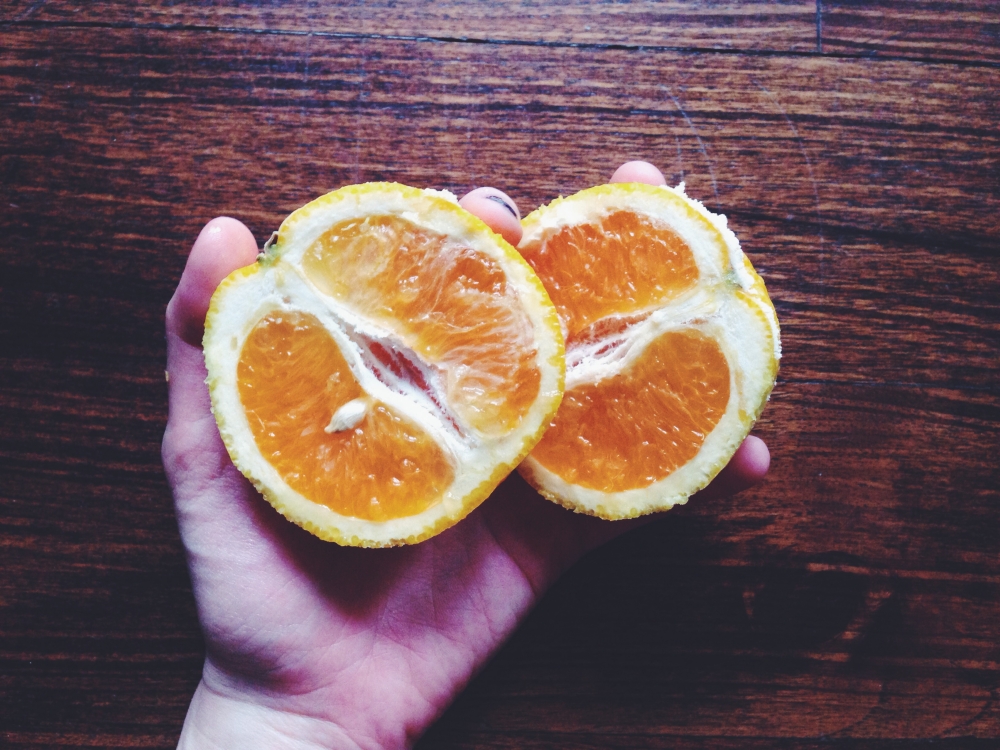 Oranges, oranges. I initially thought lemon, but lemon and blackberry is already a kill-me-classic, and with fresh, sweet oranges in the pantry, what’s there to fear? The citrus note of the cake using these was indeed milder, yet the flavour and goodness of that pulp and zest did all the talking. It still feels odd to have so much free time with the holidays in full bloom. Experimentation takes flight all the time, anywhere. Ideas flying left, right and centre. If I’m not thinking about what biology/biochem or fiction book to buy next, I’m recipe brainstorming, and goodness does it feel good. I was dying to sculpt mini layer cakes, because they’re the epitome of simple, refined, easy bakes. The blackberry lavender buttercream sandwiched between three layers of incredibly light, orange sponge adds aesthetic and textural oomph. The sweetness hits the palate just before you enjoy the moist and tender cake crumb. It truly is one of my favourite cake recipes. 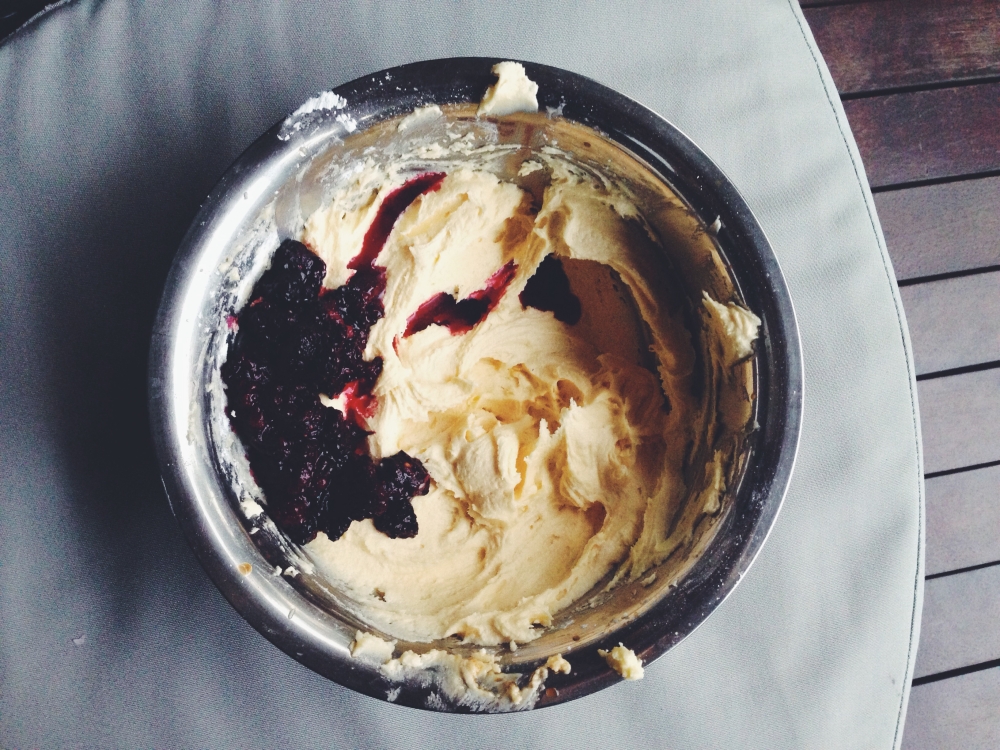 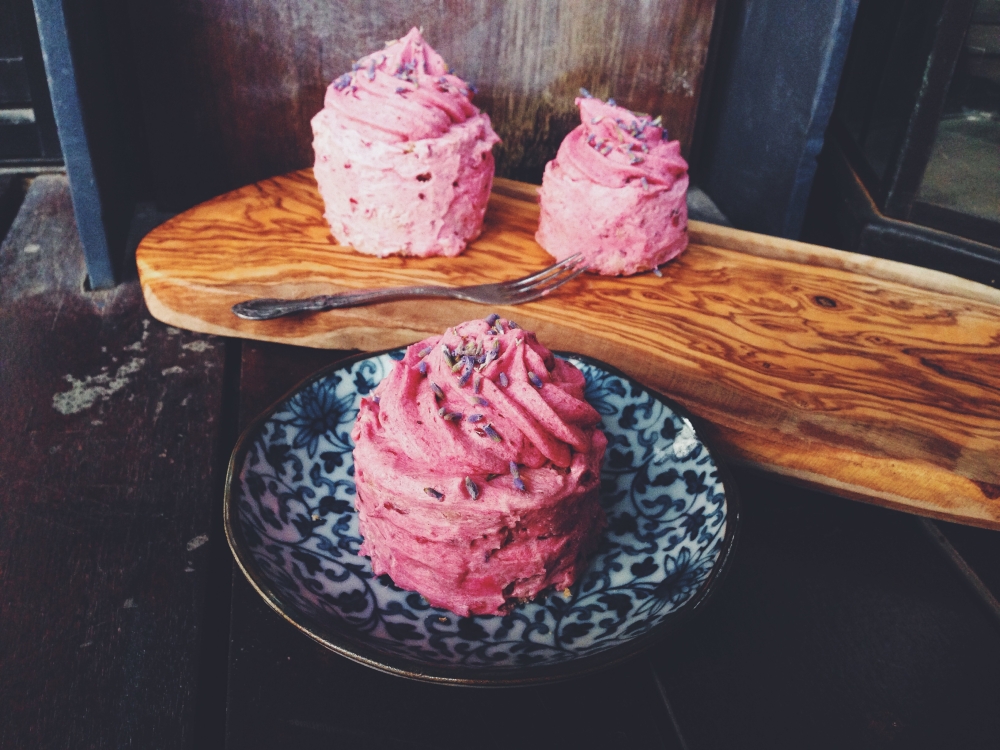 You added actual blackberries…? With the… seeds?

Alright, that part is optional. Though most recipes state the addition of blackberry puree sans all the gritty bits, I personally prefer the addition of the seeds for added flavour and texture. Combined with the dried lavender, each bite is like pink fairy dust. Pink and purple aren’t exactly up there on my list of favourite colours (which actually just comprise black and burgundy), but the saccharine delicacy of each little cake is irresistible. I had to adjust the initial buttercream recipe because it yielded too thin a consistency. It all worked out pretty well in the end. If anything, I might just add a touch more tang, be it salt or cream cheese, to the buttercream.

zest of one small or medium-sized orange

For the blackberry lavender buttercream:

55g fresh or frozen blackberries (around half a cup)

Preheat your oven to 177C (350F) and grease a 7×9-inch (or 8×8-inch) baking pan. In a medium bowl, whisk together the flour, baking powder and salt. In a larger bowl and with either a normal or electrical whisk, beat the butter and sugar for at least a couple of minutes, until light and fluffy. Beat in the zest of the orange, 2 eggs, and vanilla extract. Add a third of the flour mix, stir briefly with a spatula (no need to fully incorporate), then add half of the milk. Fold in briefly again. Add another third, the rest of the milk and the orange juice. Fold in briefly for a few seconds, before adding the rest of the flour. Mix until just combined. That part is so important, for there is a fine line between tender crumb and dull, dense, bleh. Don’t forget to scrape down the sides of the bowl and make sure the flour at the very bottom is well incorporated.

Pour the batter into the pan and bake in the preheated oven for 19-22 minutes. Put 21 to be safe (that’s how long it took mine). While you wait, make the buttercream.

In a large bowl and with an electrical whisk, beat the butter until it looks lighter and, well, fluffier. Add half of the icing sugar and vanilla, and beat. Take your blackberries and microwave on high for around 20 seconds, until you can see the juices seeping out and they are easy to mash. Mash them with a fork. Add to the mixing bowl, together with the remaining icing sugar. Beat until all is well combined. If you wish, fold in the dried lavender with a spatula. Place most of the buttercream in a piping bag fitted with whatever tip you like. Leave all the buttercream in the fridge for later use.

Once the cake is done, remove from the oven. It should be light brown and ever so slightly domed on top. Let cool in the pan on a wire rack. It will take at least half an hour to fully cool.

Once cool, take a 3-inch round cutter (or scallop-edged, up to you) and cut out little circles. Remove the buttercream from the fridge to let it warm up a little. Save the cake scraps for your family, before you eat everything yourself. You should get around 6-7 little circles, around 2 inches thick. Using a serrated knife, cut each little cake in half horizontally so you end up with two thinner cake discs. Pipe a circle of buttercream on the centre of one half, and press down with the other half. Pipe another circle on this half and then take a half from another cake and press down on that, so you end up with a mini 3-layer cake, each layer around 1 inch thick. Using a normal or palette knife, smear the sides and top with buttercream (reserved from the bowl) for make the crumb coat. Leave the cakes in the fridge to set and firm up for at least 2 hours, or overnight.

Take your piping bag and pipe more buttercream on top, then sprinkle with extra dried lavender.