Do you feel the same emotional high as I after creating a meaningful breakfast? Such that it ceases to be a shallow acquaintance in the morning, disappearing as fast as it appeared– head to table, then head to door. It’s so much more than that. It’s a tuning into the senses, savouring a myriad of plant-based foods that nourish and lighten the soul, the abundance of classic and sometimes unexpected flavours colouring the rest of your day with creativity and comfort.

Just as how some people have shaped and supplied your existence over x number of years, food too mirrors this truth. In clashing flavours, harmony is found. 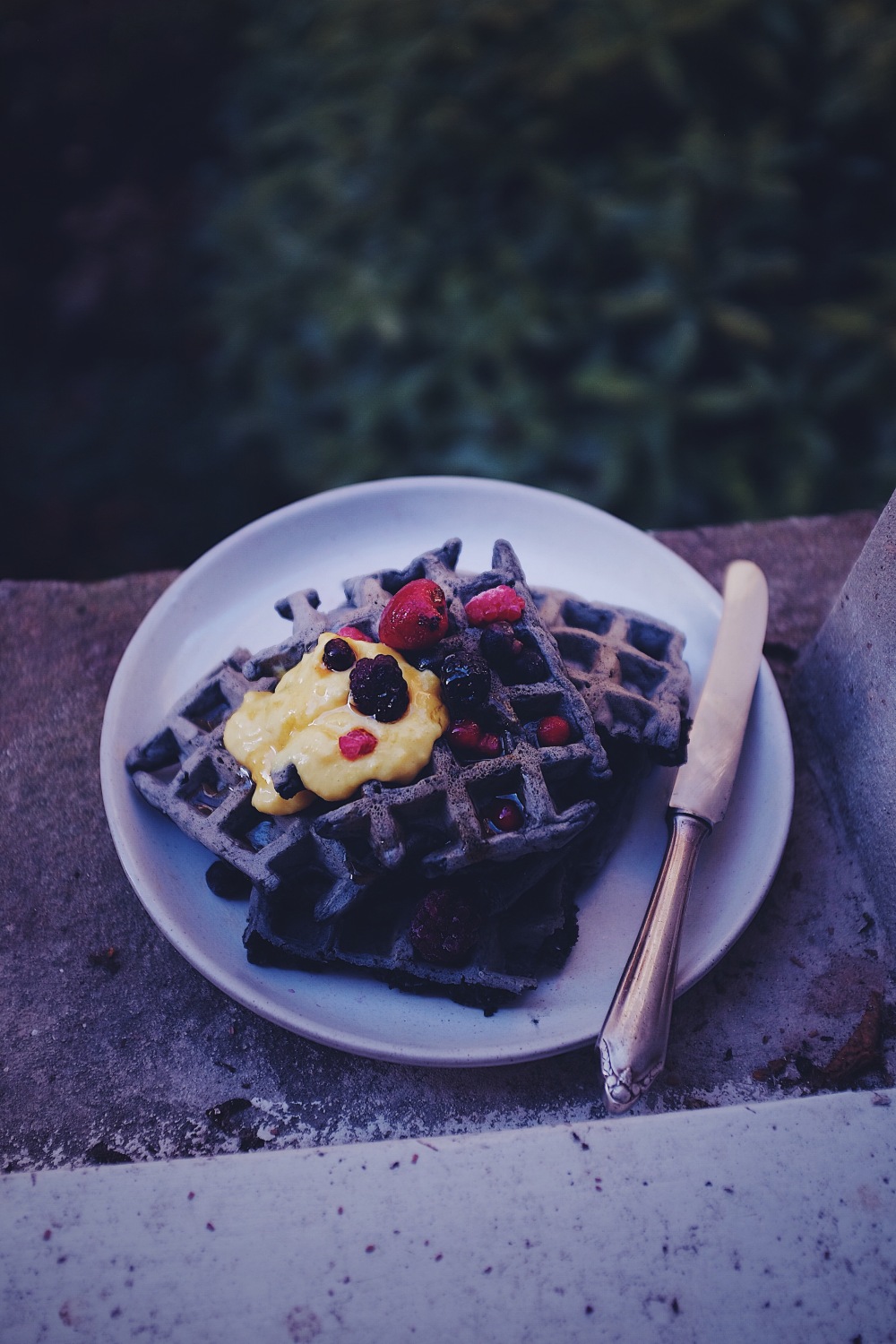 There’s no ‘right’ time to treat yourself. Lately I’ve been re-focussing once more on the importance of routine, which really does free up a lot of creative head space during the day. Suffice to say that, upon the first moments of rising, after a cleansing elixir of which recipe I modified from various parts of the Internet  (1 tablespoon apple cider vinegar, juice of half a lemon, top up the rest of my 750ml glass with filtered water, mix mix mix), meditation, a short workout and mini journalling session, a generous, flavourful, exotic breakfast is always welcome.

Black sesame, matcha, red bean. These are the flavours which still call to be delivered on an almost-daily basis. The magical trip to Japan was bookmarked with earthy flavour, soil and icy freedom etched in the wintery grey skies. These waffles are a throwback to some charcoal waffles I used to travel far for back in Singapore, though are richer in traditional goma flavour instead of being just, well, black. The use of activated charcoal here helps the colour, though that is optional. What makes it special is a black sesame paste made of finely ground black sesame, maple syrup and sesame oil. The ratio of the paste is much more coarse than that for the actual waffles, but as long as you get a relatively coarse, all-black paste then you’re set and ready to go.

And this lemon curd! Ah lemon curd, something I have unconsciously craved for so long and have failed to substitute with various tangy yoghurts and the morning lemon wash, has finally made a sturdy comeback. All vegan, all delicious, creamy and silky. I used agar powder since I did not have vegan gelatin on hand, but use the latter if you do have it. The agar promotes a more jelly-like flavour so use much less of it. Another great thing is that you can make both waffles and curd at the same time, and not waste time making one thing after the other. If lemon curd isn’t really your thing, these waffles would pair well with most anything else– this morning I coupled a toasted one with tahini, frozen fruit and maple syrup, the white pasty sesame-y tahini (yeah, to think I speak and type English) amping the roasted, toasted flavour of the black sesame paste in the waffles. The lemony curd cuts through this pastiness, a sunny break. 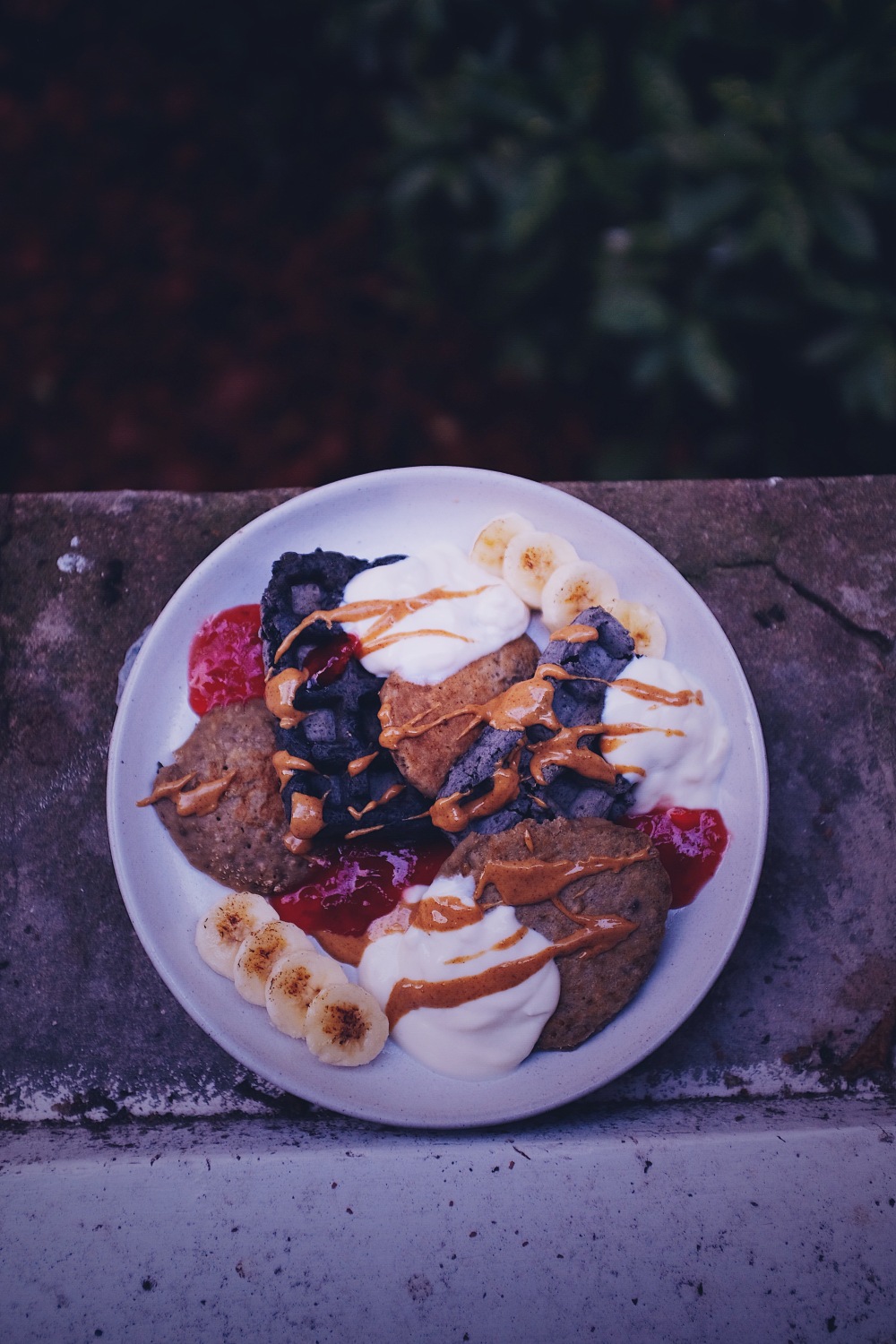 90g oat flour (store-bought or process 90g oats in a food processor; alternatively substitute with another flour of choice, be it plain, spelt, or perhaps a gluten-free option)

2 tbsp sugar of choice– I used coconut, you can use plain/brown/maple/golden caster

Optional: 1 tbsp activated charcoal powder (you can get this in powder form, or cut open the capsules to release the powder inside)

For the black sesame paste: 65g roasted black sesame seeds+ 2 tbsp each of maple syrup and sesame or vegetable oil

350ml plant milk of choice (I used almond; you could use soy/cashew/oat)

For the lemon curd:

The juice of 1 lemon

a light pinch of turmeric, for colour (literally just the tiniest smidgen)

a pinch of salt

First, make the black sesame paste. In a food processor, process the black sesame seeds until fine. This will take quite a while, perhaps at least a couple of minutes (well it took a while for me, at least). Once they look quite fine, add the maple syrup and oil and pulse again until everything is well combined. The paste should be dark and sticky.

In a separate bowl, weigh out all your dry ingredients and mix together well. Add the charcoal powder, then all the wet ingredients. Mix everything together until just combined. The mixture should be moderately thick, dark, and have speckles of the black sesame paste. Heat up your waffle iron according to its instructions and ladle in your glossy, dark batter. Do not put too much or the batter could seep over the sides once you close the lid. Wait for at least 3-4 minutes before opening the lid and checking. Mine does not need flipping over so I only had to close the lid for a couple more minutes again.

While the waffles are cooking, you can combine the ingredients for the lemon curd except for the yoghurt in a small saucepan. Mix everything together well then bring the contents to a boil. Once boiling, take the pan off the heat. This part is important! It may look as though the mixture is still very liquidy, but that’s how it should be. Leave it to cool while you deal with the waffles. After half an hour, take a spoon and mix the curd. It should be a little jelly-like, or at least thick. Add the yoghurt and mix to lighten the colour and smooth the flavour (otherwise its a little too intense).

The waffles and curd will keep for up to a week in your fridge, or you can freeze both and heat up either whenever you want. Serve with each other, with maple syrup and fresh fruit. Bliss, at its true finest.